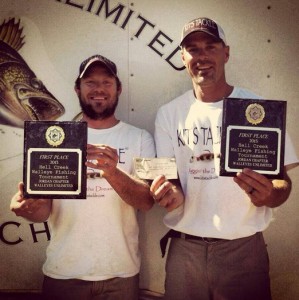 Holy hot fried walleye cheeks do I have a good blog for you this week!! Last Thursday, I loaded my gear into the wife’s car and I was on my way to the always magical waters of Fort Peck to fish the annual Hell Creek Walleye Tournament with my friend Kris Keller. After a quick stop at Scheels in Great Falls for a few last minute squirmy items, it was peddle to the meddle to Glasgow, Montana to see all my Eastern friends. Nearing the promise land I had to slow down a couple of different times to let some slow moving turtles cross the road. It was pretty cool to actually see a couple of painted turtles…must have been a good luck sign That reminds me…I need to get a call into the DOT (Department of Transportation) to get a turtle crossing sign installed just east of Malta!! Ha ha. Finally arriving in Glasgow, we all met at the DELICIOUS and award winning Durum Restaurant (406) 228-2236. After a few ice cold pints, a mouth on fire from Thursday wing night and sore cheeks from laughing so hard with all my friends it was time to retire to our prairie camper for the evening. As I lay falling asleep under my beloved Eastern Montana sky…I dreamt of giant walleyes. 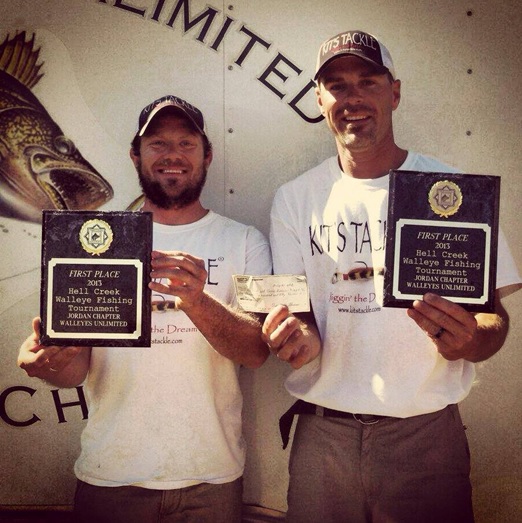 Before the alarm sounded the next morning, I was awakened by a rooster pheasant blurting the song of his people!! I mean seriously, could Fort Peck get any better…YUP!! The next thing I knew we were backing the boat down the ramp at the Marina launch right in Fort Peck. We decided to boat the forty miles down to Hell Creek and rent a boat slip for the weekend. With the red morning sun peeking over the CMR I had goose bumps that looked like land mines. I have never actually boated on this section of the lake, so it was a new and humbling experience. I can assure you this, a guy feels pretty small in the world when boating on the main lake of Fort Peck. Completely taken away and in awe from the beauty, we neared where the pre-fish would begin. As we got the rigging rods out, I instantly grabbed my pitching rod and started shooting Glass Minnows to shore. On my second cast, THUNK…I set the hook in a gorgeous little 17” walleye to start the day off. After a few more casts, and donated jigs to mean Mr. Teethy Pants, I gave my full attention to the rigging rods.

The one thing I learned in three days of rigging, if you’re doing it right, you’re busting your butt!! There was never a two minute period where I wasn’t frantically running around the boat. To my surprise, this made it feel a lot more like jigging keeping so busy. Nearing the end of a gorgeous main lake point, Kris’s rod loaded up and he did his magic. The next thing I knew I was scooping a chunky 22.5” walleye into the boat. Not the biggest walleye in Fort Peck, but remember folks, consistency can be key in tournaments!! Not another hundred feet and my rod loaded to the water. Giving it the Johnson hook set I said, “Holy crap Kris, is there Marlin in here?” This fish had some serious shoulders and was ready to do battle. Finally with the fish nearing the boat and anticipation growing…the hook popped out and the fish was gone. Not saying any swear words at all, it still gave us confidence knowing it was probably a big walleye.

By now, it was 96 degrees and flat calm and the ankle chomping horse flies were in full swing. We decided to head into Hell Creek and get our eater sized walleye filleted and get settled in. Before I get any further, I want to give a BIG shout out to the Dasingers for letting us stay at the cabin and to all the people involved in the tournament. I was absolutely amazed at how freaking awesome each and every fish head at Hell Creek was!! And a big thanks to Clint Thomas, the owner of Hell Creek Marina for the hospitality and always hard work put into everything he does (www.hellcreekmarina.com) Chomping down a delicious burger, we laughed and enjoyed the company at the rules meeting a little longer than we should have Man, again, what a great group of people!!

The next thing I knew, I awoke to getting beamed in the head with a pillow to the words “come on man, let’s go win this thing.” After brushing my teeth and putting my game face on, it was time to start “RIGGIN’ THE DREAM.” As the tournament horn sounded Kris said, “Hold on man,” and we went ripping out of Hell Creek bay like a striped ass ape!! Heading across the lake and east we found our point. Like a couple of finely-tuned machines, we had our rods in the water and ready to rig. Holy bass!! This is where things got interesting!! We literally had to weed through four pound bass to catch the walleye. I actually had to force myself to act frustrated because I was having so much fun with the big smallmouths!! Ever since I was young, smallmouths have reminded me of having a vibrating brick on the end of your line. Getting my tenth or so bass in the boat, he went BLAHHED and out popped a spot tale shiner still in good form. Kris said, “Dude, chuck that up here,” and he placed the half-digested baitfish on his rig. No longer did it hit the bottom and POW!! The next thing I here is “NET” and Kris’s rod is doubled over to the max. We both stood staring into the depths waiting for a giant 30+” walleye to arise. With my netting arm shaking and ready to scoop a giant set of whiskers arose…jumping back I said, “What in the heck is that?!?!” Over laughing so hard, Kris was mumbling the words, “It’s a catfish man.” After netting the prehistoric beast, rather than being pissed off it wasn’t a giant walleye, we laughed so hard I almost fell into the lake!! 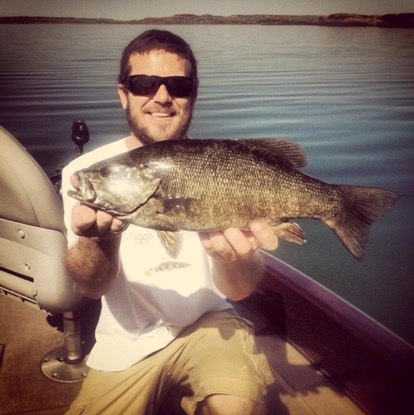 An amazing Smallmouth from the Trip!!

The best advice I can give if you’re going to fish tournaments is to make sure you have fun…the rest will take care of itself!! Regaining our composure from the whiskered rotten minnow muncher we started doing work. Like I mentioned earlier, we weren’t on a big fish bite, but we were on a mid-20’s bite and that can pay big dividends in tournaments!! Especially if you get a kicker fish to go with the bag!! In one pass, the new prototype Glass Minnow Rigging Flies proved worthy with Kris putting a 23” and 24” fish in the box and myself cleaning up in the back with a 23.5”. We had to work very hard the rest of the day to get our five good fish, but we stuck with it and made it happen. Getting in on Saturday afternoon we were sitting in 3rd place and we felt good about our hard work and weight. Once again, over a steak dinner the highlight of the night was the diversity of Fort Peck…talk about a freshwater ocean. Our friend, Todd Dooley, while pulling cranks, hooked into the Fort Peck Monster!! After doing battle for almost an hour a giant paddlefish arose. He had hooked the giant billed beast in the tail with his crank bait…what a friggin’ rush!! 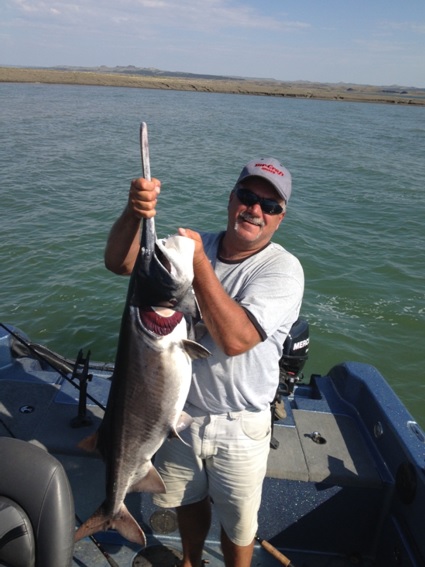 Todd Dooley with his giant Paddle!!

The next morning we were right back on our point and it was a dead sea!! We decided to move one point up and BINGO!! We were catching fish left and right, in-fact we actually had a quadruple hookup at the most in opportune time!! Drinking to many diet dews (our morning coffee) I had to pee like a gunshot water buffalo!! As luck would have it, mid business, the Chinese fire drill sounded at full alarm!! Both my rods were going nuts, Kris was holding two rods screaming “Net dude” because one of the fish was a big walleye and I’m trying to get the goods put away. Let’s just say I was running around the boat grabbing rods, setting hooks, and netting fish all with my shorts around my ankles…I bet the other tournament competitors were real impressed!! I don’t know if I have ever seen Kris laugh so hard and we even got our biggest fish of the tournament out of the deal…a spectacular 25’’ golden goodie!! Talk about an embarrassing but funny as heck memory!! 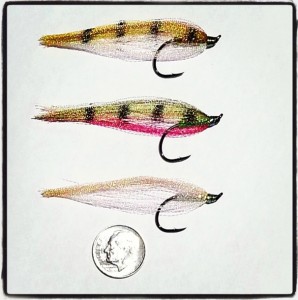 The all new Kit’s Glass Rigging Flies…WATCH OUT!!

With only a couple hours to go we had a very impressive box of fish nearing 25 pounds. We decided to try some new tactics and hunt a big fish. Making a drift along a picture perfect shoreline Kris hooked into a huge 28+” walleye in 11 feet of water. As the giant came up we only needed a couple more feet before I could scoop her into the net and the nightmare from the day before was relived. The Glass Minnow Fly popped from her mouth and she swam happily back into her waters!! We were both frustrated, but I assured Kris that neither of us did anything wrong and it just happened. Throughout the rest of the afternoon we caught a bundle of good fish but weren’t able to upgrade any of our great fish. We were first in so the anticipation was like wildfire running through our veins. As the cards came in and the weights were written on the board I could hardly watch!! As the final card was recorded I jumped on Kris and gave him a huge hug while I was trying to hold back the tears!! There is almost no way to describe the feeling unless you live it in the moment!! After calming down from the excitement, we once again put our game face on to boat back to the dam in a high wind lake advisory!!

Let’s just say Kris was giving me some weird looks with my double life jackets and floaties on…ha ha ha!! The ride back was a little western, but we were so jazzed about our weekend we had fun with it. Finally getting back and realizing it was time to go home was a major blow…let me tell ya!! I had just had the most fun I can ever remember and now it was coming to an end. Thanking my partner Kris just as honestly and sincerely as I could for the magical weekend, I followed the setting sun back home to Helena. As I type these last few words the goosebumps are literally shooting out of my arms!! Man I love this stuff!! So cheers to “Riggin’ the Dream,” baby!! 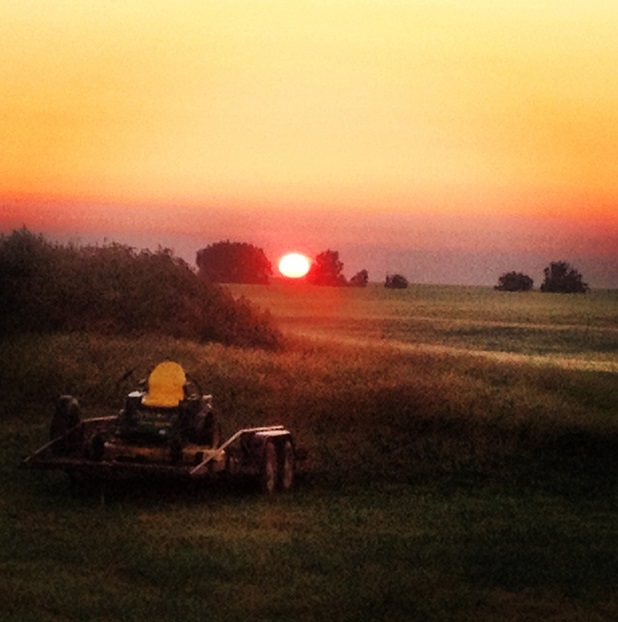 Nothing beat an Eastern Montana Sunrise!!