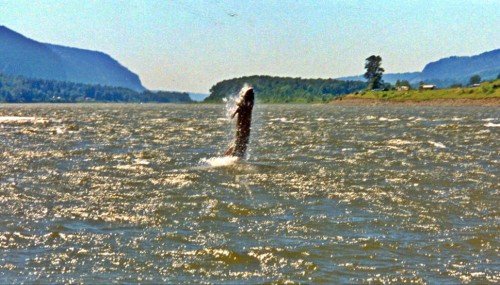 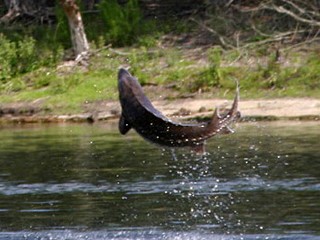 GO SLOW when you are boating on any body of water that has sturgeon in it!

The Florida Fish and Wildlife Conservation Commission (FWC) recently warned the public to go slow while boating the Choctawhatchee River after a child was “severely injured” on a fishing trip on June 22nd after a huge Gulf sturgeon jumped in the family’s boat, hitting three children.

According to a recent post on wctv.tv, eight year-old Nathaniel Smith was hit so hard by a 3-4 foot sturgeon that jumped in the boat, he was knocked unconscious.  Nathaniel’s 16 year-old sister, Amber, was knocked out of the boat by the force of the fish, while Scott and Angela Smith’s nephew Austin’s head was grazed by the gilled monster.

Scott recalled the incident while stating, “The sturgeon just came out of nowhere, and I yelled and tried to cut the motor but it was too late.”

Scott said his son still has headaches but is recovering after doctors found he had two skull fractures from the ordeal.  Nathaniel was released from the hospital on July 2nd.  Even though Scott has fished the river before, he just never expected a sturgeon might jump in a boat and actually hurt a person.

Apparently, this is nothing new.  A sturgeon-jumping incident was recorded back in 2004 when a man was boating down the river on his own and was slammed in the chest by a jumping sturgeon leaving his internal organs bruised.  Although, scientists don’t know why sturgeon jump or leap from the water, it is definitely a smart idea for people to keep their eyes open while in ANY waters that have sturgeon.