I have been a Smith & Wesson fan for years and I own several S&W handguns. My 686 Plus is the handgun that I shoot the most accurately, so I was quite excited to finally be able to try a couple of S&W’s new 1911 offerings. The “E” series guns have been on the market for a couple of years; but they have, like many other new models, been hard to find. “E” stands for enhanced and this series of guns is just that. 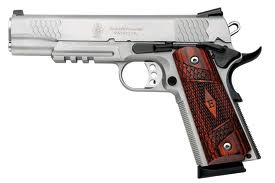 The guns have a 70 series trigger, wood laminate grips, front strap and back strap checkering, stainless steel construction, and front and rear 3 dot fixed sights.  The full-size guns weigh about 39 ounces. There are two Scandium frame models available. The Scandium guns weigh about 30 ounces, have a round butt and 4.25 inch barrels, and come in black, and black and stainless two-tone finishes. 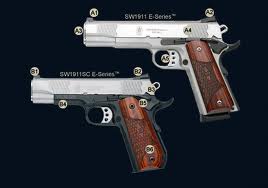 Tactical rails and tritium night sights are available on a couple of models in both a black or stainless finish. There is also a model with Crimson Trace® laser grips. The gun I was able to shoot was the base “E” series 1911. This was a stainless gun with a matte finish, “fish scale” grasping surfaces on the front and rear of the slide, as well as the wood grips. This is one handsome gun with terrific fit and finish. Shooting this gun was a treat. It has an excellent trigger, light, no take-up or creep, and little overtravel. The checkering made for a sure grip when firing full charge 45 ACP rounds. At $919 suggested retail and probably less “on the street,” this is a great bargain. 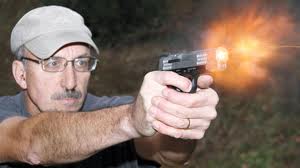 The other S&W 1911 was one of the new Performance Center guns. There are two models; a round butt, Scandium, 4.25 inch barrel gun with fixed sights for concealed carry and a full size, stainless, 5 inch barrel pistol with adjustable sights. The slides of both guns have 3 slanted relief cuts in the front to lighten the slide and the “fish scale” grasping surface on the rear. Both guns have checkered front and back straps, as well as G-10 composite grips. These are good looking guns, both with a suggested retail of $ 1539.

I shot the full size gun. It had a good trigger, one of the best I have ever found on a production gun. However, this gun was a disappointment; the sights were off about 6 inches to the left and the gun’s grip safety kept malfunctioning causing the trigger to lock up. I was surprised that a factory sponsored event would provide a flagship item that performed so poorly. I suggest you save 500 bucks and buy the “E” series gun.

I shot several other 1911s from other gun makers ( I’ll tell you about them later), but the “E” series really captured my fancy. Its features, price, and performance make it my “best buy 1911.”  I loved this gun; add an adjustable rear sight and I don’t think I can live without one.