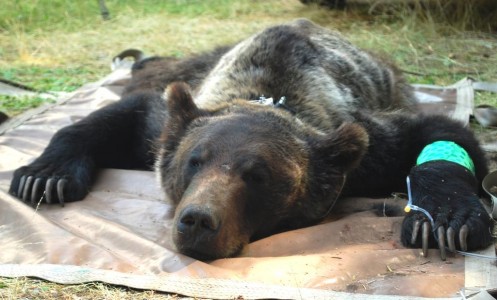 Young Male Grizzly Relocated to the Cabinet Mountains
By angelamontana 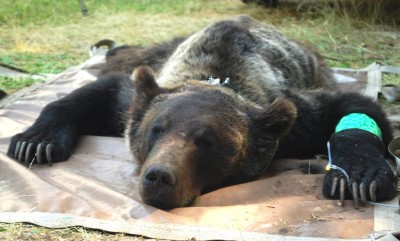 FWP captured the 3-yr old sub-adult male grizzly bear in Coal Creek in the Whitefish Range (Flathead National Forest). This bear has no history of conflict with humans and has never been captured before. The bear was relocated to the Cabinet Mountains and released above Spar Lake in the Kootenai National Forest.

This program is an on-going effort to boost and recover the grizzly bear population in the Cabinet Mountains and is a cooperative effort between FWP and the US Fish and Wildlife Service (USFWS). Under the program, FWP captures bears in backcountry areas of the Northern Continental Divide Ecosystem and USFWS monitors the animals after their release in the Cabinet Mountains. All grizzly bears relocated to the Cabinets are monitored with a radio collar until their collars drop off. The collars utilize the global positioning system (GPS) to gather locations every few hours in order to follow the bear’s movements.

The relocation of this male grizzly bear marks the eleventh grizzly bear to be released into the Cabinet Mountains as part of this cooperative population augmentation program since 2005.

(Report and photo by Montana Fish, Wildlife and Parks)