A Living Rock?
By angelamontana 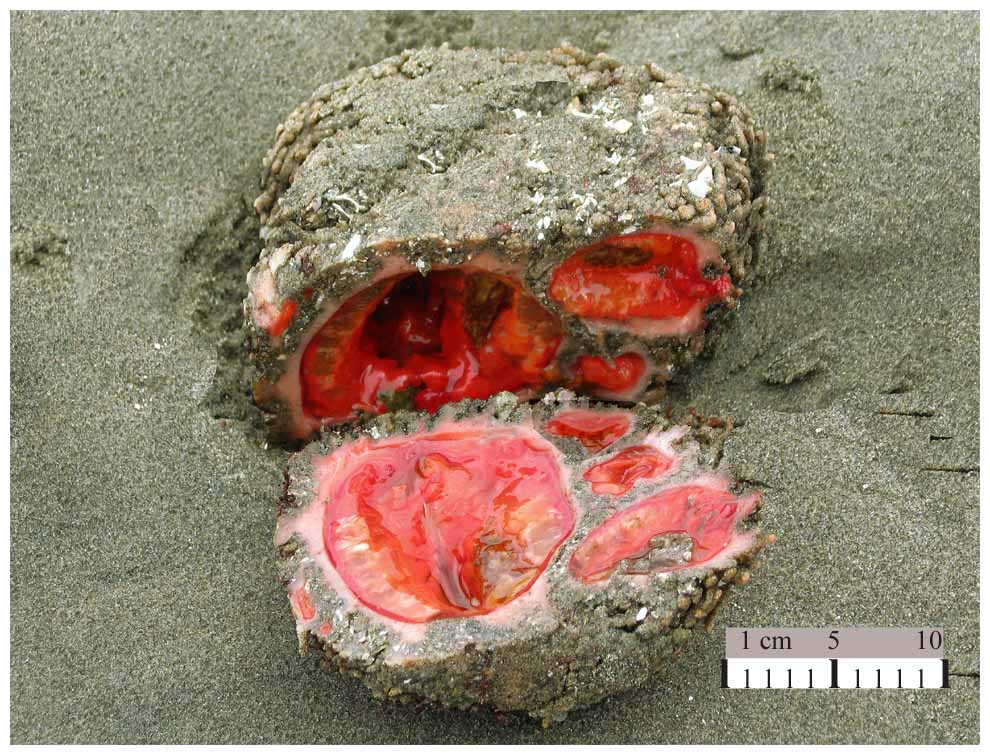 This rock-like sea creature apparently is “completely immobile like a rock”, according to an article posted on grist.org.  It sucks in water and filters out microorganisms for food.  It has clear blood and also secretes a rare mineral called vanadium, which is also found in crude oil and tar sand.  It reproduces by “tossing” clouds of sperm and eggs into the surrounding water, all the while crossing its fingers…or whatever…in hopes that they connect.  This process of reproduction is referred to as “selfing”.  The creature is called Pyura chilensis, and this might be the closest anybody will ever get to getting blood from a rock!

This incredibly unique animal is found off the coast of Chile and Peru, and the locals enjoy feasting on it raw or mixed in stews.  It is apparently heavily “fished”.  The article refers to it as a “meat-rock”, and that is exactly what it is!  The words “bitter” and “soapy” have been used when describing the flavor.

After doing a search on Pyura chilensis on Wikipedia, I found the following information:

Self-sexing vanadium-secreting intestine-rock thing is actually called Pyura chilensis (terser, though less descriptive), and it’s found off the coast of Chile and Peru. Locals eat it raw or in stews, and non-locals describe the taste as “bitter” and “soapy” with a “weird iodine flavor.” Sort of what you’d expect from a meat-rock, I guess? Maybe that’s the vanadium, a mineral also found in crude oil and tar sands — creatures like P. chilensis can have up to 10 million times more vanadium in their bodies than is found in the surrounding water, for no obvious reason.

Pyura chilensis is a tunicate that resembles a mass of organs inside a rock. It is often found in dense aggregations in the intertidal and subtidal coast of Chile and Peru. It is a filter feeder that eats by sucking in seawater and filtering out microorganisms.

That would freak me out to find a “rock” busted open on the shore with blood and meat in it.  The author of the article makes a great point by stating that knowing this makes it difficult to know which inanimate objects in nature might be filled with “innards” in the future.

(Information and photos courtesy of grist.org)