Amongst painting Glass Minnows until wee hours of the night, we still snuck out for a couple spectacular days on the water. It started at Holter, and it started HOT!! Hearing the perch fishing was good, that was our main goal of the trip; but not before we lobbed some magnum hardware for browns along our way. On my first cast (using “the jerk”) it got fouled over itself before it hit the water. I gave it a few quick pops in hopes it would untangle and to no avail I started reeling it in. As the colossal jig was skipping across the top of the water, a giant dorsal fin emerged behind the jig like a scene from the movie “Jaws”. Holding my breath, I stopped the jig and then ripped it right to the boat and the giant beast circled my bait twice and then disappeared into the depths. He even had the nerve to haunt me by opening his mouth then quickly deciding he wasn’t hungry and “poof”, gone forever!! So let’s just say the perch fishing got put on hold for a while. 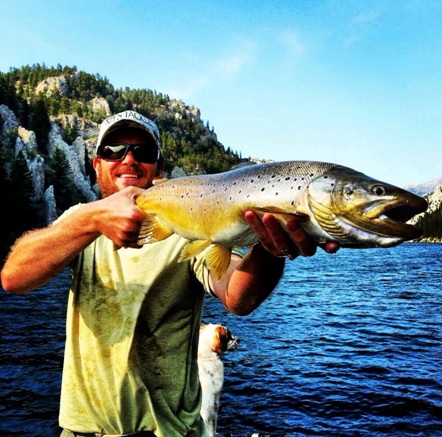 An Atlantic salmon looking Brown Trout from our trip…it fought like one too!!

Moving along the shore still in shock from the biggest brown I had ever seen, dad yelled “Trev, big fish!” He had cast his Fire Tiger Glass Minnow right to shore and got crushed…like my lab Pika eating her good morning biscuit. After a long battle the fish emerged and a fish it was…a wonderful 28’’ Brown with very unique coloring and spotting. These are the fish that make up for the hundreds of hours you put into pursuing fish of this magnitude. Not only are big browns rare, but they are the most sophisticated of all the fresh water fish. I relate our passion of chasing these awesome creatures to hunting huge bull elk with a bow or casting for giant muskies…everything has to be perfect. But after seeing some of the flashes this year…it’s enough to keep a guy coming back (and leave a coffee stain in your shorts.) Just like the 350 bull screaming his head off at twelve yards with no good shot. It is about the pursuit, the mystic feeling and most of all the adventure…it’s all about the adventure. 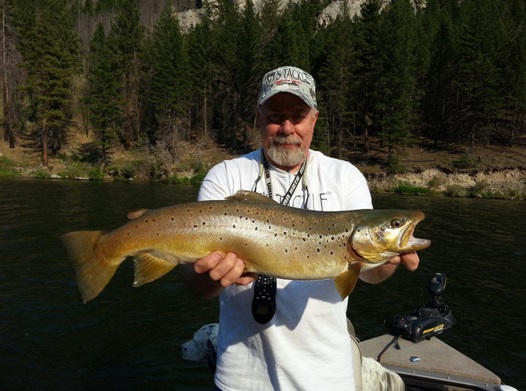 Dad with a goat of a Brown Trout

Spending the next six or seven hours chasing golden goodies without any follows we decided to retire to perch fishing. Man, what we had been missing all day! No a perch isn’t a giant brown but they are about the most fun a guy could have…especially if you like action. Being a big fish ambassador I have built an empire of patience, but it isn’t needed for these tasty little brutes. We geared up the 4lb mono and the Micro Glass Minnows and had a hay day!! Sheesh, I felt like a little kid again smiling from ear to ear. We harvested about a dozen quality fish to eat and to the frying pan they went!! It is such a rewarding experience feasting on fresh fish you caught the same day. Yellow perch fried hot is better than beer…yup, I said it!! Especially with dad’s homemade tartar sauce and farmers market mini russet potatoes…mmmmmm!!! 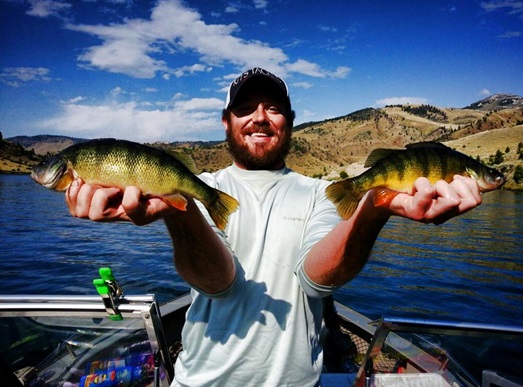 To make the day even more rewarding we got to see a family of black bears. A couple weeks ago during the sprint of the carp spawn there was a massive unexplained die off. Carp carcasses littered the shore along large portions of the lake. With almost no moving water in the lake we believe they had a shortage of oxygen in the hot temps and shallow water during the spawn. Regardless of reason, the aroma that could knock a snipe off a gut wagon was as sweet as apple pie to mamma bear and her cubs. We were jigging along a shoreline totally absorbed in our jigging cadence when our dog “Izzy” started barking wildly. As I looked up, a couple bear cubs were ravenously enjoying a nice rotten carp. And mamma was up the hill resting her full belly and enjoying the scenery. Totally stoked about the awesome experience we were involved in, I couldn’t help but think about the bear sausage I ate a few weeks earlier. Watching rotted carp drip from the bears mouth I think I will stick to grass fed elk from now on…ha ha ha!!

Waking up the next morning with a perch fry overdose we grabbed our coffee mugs and to the annual Upper Missouri River Walleyes Unlimited John Arnold Tournament we went. After enjoying some time visiting with our friends it was time to put the game face on and whip those Glass Minnows around. Cruising down beautiful Hauser Lake we were excited to try some new spots and jig the day away. Only a couple casts into the day dad hooked into a monster right on shore and let me clue ya…having a big walleye fall off first thing in a tournament is a heartbreaker. Staying determined it wasn’t a twenty casts later into a beautiful point and dad set the hook into a chunky 22’’ walleye. For anybody that knows Hauser Lake, this is a darn good fish to have in the boat. We spent the rest of the day hunting big fish and the only thing we could scrap up was a fifteen pound carp (that was a wild fight on 4lb test.) Pounding out a final shoreline before the buzzer, we decided to pack it up and head to the weigh in.

Believe it or not, dad’s scrappy 22’’ walleye held on for second place overall and the big fish of the tournament. What a fun day of fishing together and competing against such a great field of folks. The fishing is a blast, but when you get back to the potluck lunch with a group of people this awesome…now that’s “Jiggin’ the Dream.” So cheers to a wonderful weekend with friends, fish fry’s, golden meat eaters, big perch and bears~ 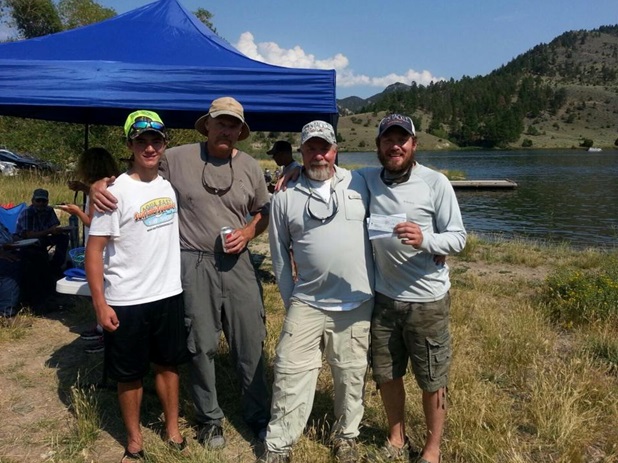 It’s always fun competing against other amazing aglers…we fell short to Jim Gillespie and his son Tyler!! Congrats on the win boys!!