How to Avoid and Diffuse a Mountain Lion Attack
By angelamontana 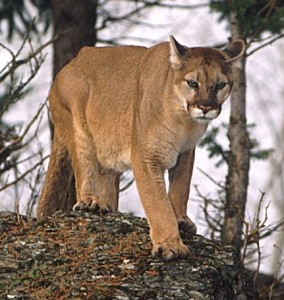 I remember hearing a story being told by somebody years ago about a couple of hunters who were out in the woods, and a cat crossed their paths.  Apparently, all of the men panicked and ran while scrambling up different trees.  The lion allegedly became confused and took off not too long after the incident.  Now, I cannot confirm nor deny the validity of this hunting tale, but it is kind of funny whether it’s true or not.

The following tips are to be followed when an encounter with a mountain lion was un-avoidable, and there is a cat in front of you:

If somebody was attacked, and they decide to stick around because they don’t want to leave their stuff behind, then they are kind of asking for another attack.  That’s my opinion, anyway.

So, there you have it.  Three ways to avoid a mountain lion encounter and four simple things to do in the event you are confronted byone.  I hope nobody is ever confronted by a cat in the first place, but don’t forget to at least try the above suggestions if you are!