Wolves Cause Death of 176 Sheep Over Weekend; Forest Service Says Stay Out of Area
By angelamontana

The first sentence of an article posted today on tetonvalleynews.net read “U.S. Forest Service officials are asking people to stay out of an area where a large sheep kill was reported over the weekend.”  Wolves have been confirmed responsible for the death of 176 sheep, approximately 5 1/2 hours from Missoula.

If you are a Montana wolf hunter/trapper, and you want to hunt/trap in Idaho, out-of-state tags can be picked up over the counter.  You can get more information on their wolf season dates and quotas by clicking HERE.

Check out the article: 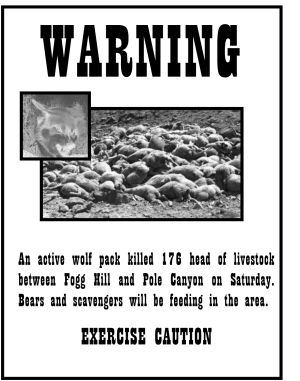 Billie Siddoway, whose brother, J.C. Siddoway, runs sheep near Fogg Hill, posted this warning about the wolf kill Saturday at the trailheads of Pole Canyon and Fourth of July trails.

U.S. Forest Service officials are asking people to stay out of an area where a large sheep kill was reported over the weekend.

Jay Pence, Teton Basin District ranger, said the sheep kill could attract a lot of people hoping to see predators coming to feed on the carcasses.

Ranchers and others are trying to deal with the situation, and visitors can hamper their activities.

“There are a lot more fun things to look at than dead sheep,” said Pence.

The animals belonged to the Siddoway Sheep Company and were grazing in the area about six miles south of Victor, according to a release from Siddoway. The attack, they said, occurred around 1 a.m.

Todd Grimm, director of the Wildlife Services Program, said his office confirmed the depredation Sunday. Many of the animals died from suffocation, since some apparently fell in front of the rest, resulting in a large pile-up.

“This was a rather unique situation,” said Grimm. “Most of the time they don’t pile up like this, but the wolves got them running.”

Only one animal seems to have been eaten in the attack, according to the Siddoway release.

“The sheep are not fenced,” said Billie Siddoway, in an email interview. “They move every few days to a new pasture within a designated area. The sheep are herded and monitored by two full-time herders, four herding dogs and at least four guard dogs.”

Grimm said there is already a “control action” in the area. Since July 3, 12 wolves have been lethally trapped, including nine pups. The goal is to take them all, he said.

“We expect that bears and other scavengers will soon locate the kill site,” said Billie Siddoway.

See the Teton Valley News Aug. 22 for the complete story.