Last week I took my first trip out on to Yellowstone Lake in Yellowstone National Park. The boat trip was to the Southeast Arm where a commercial netting boat was capturing lake trout. It was the first time the Park Service had set nets in the remote section of the park. 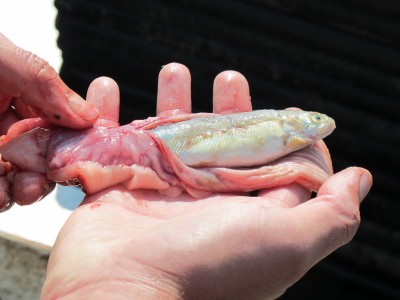 The Southeast Arm is where the Yellowstone River flows into the lake. Nearby, Beaverdam Creek also flows in. Both are sources for Yellowstone cutthroat trout fingerlings that, after hatching and growing up a bit in the streams, migrate downstream into the lake. That’s where some lake trout are staging in hopes of gulping down the young fish.

MSU graduate student John Syslo opened up the stomachs of several of the captured lake trout and found that they were indeed consuming the cutthroat as they migrated into the lake.

The Park Service is trying to reduce the number of lake trout in an attempt to revive the native cutthroat trout fishery. To do that, the agency has been netting lake trout since 1998. The effort to trap the fish has gone up considerably, as has the catch rate, so lake trout numbers may finally be falling.

Yellowstone Lake was once a stronghold for its namesake cutthroat trout, which also provided food for eagles, bears and other species. Lake trout, because they live in deeper waters and spawn in the lake, do not support any of the park’s other species.

The lake trout were not native to the lake and were first discovered in 1994.