The following story was published on spokesman.com the day before yesterday (September 15th).  It is quite the mountain lion story that took place in Washington state.  It is also a good thing nothing went to waste.  Check this out:

After taking cover and blowing cow elk calls Monday morning, two bowhunters had a one-in-a-million hunting experience in Pend Oreille County when they lured in a pair of mountain lions.

And because they were honest with Washington Fish and Wildlife police about the outcome, they don’t have to keep their story a secret.

Ben Hendrickson, 36, of Spokane and Rod Noah, 58, of Chattaroy had been hunting for days when their luck suddenly changed.

“I was nearby, but Rod was doing the calling, so they were homed in on him,” Hendrickson said.

“At first, I thought, ‘Deer’ – until one lifted its tail,” Noah recalled.

Although they were mainly hunting elk, both archers had bear and cougar tags in their pockets.

“I’ve never even seen a mountain lion in the wild,” Noah said. “I didn’t hesitate at the chance.”

Noah clicked his range finder on the lead cat – 32 yards. The trailing cat bounded behind a tree and out of sight as Noah stood up, but the lead cougar turned broadside, presenting a perfect target.

“I was using a lighted nock and it looked like a flare going right behind its front leg,” he said. “The lion jumped and crashed through brush out of sight down the hill, but I knew I’d smacked him hard.”

The two hunters came together, and waited a few minutes to let the broadhead do its job and avoid spooking a wounded animal.

“Heck, I needed a few minutes to get my heart rate down,” Noah said.

“I thought the lion had gone left, but a blood trail doesn’t lie, so we followed it straight down the hill,” Noah said.

A short way down to the bottom of the clearcut they found a dead cougar. 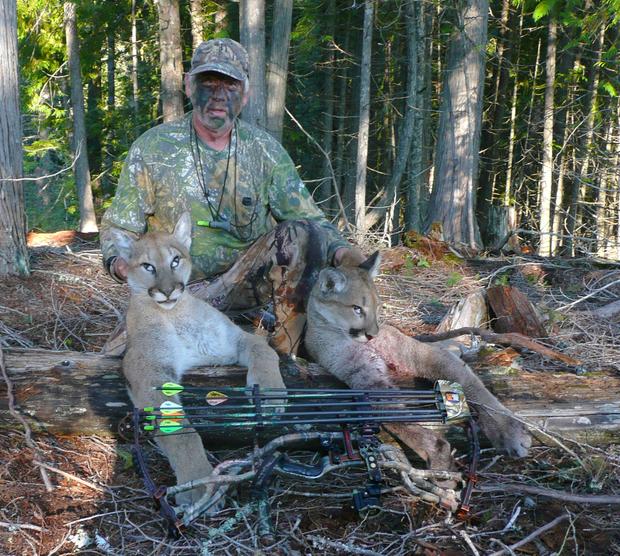 Bowhunter Rod Noah of Chattaroy poses with cougars that came in to his elk calls.

“We high-fived and started taking pictures,” Noah said. “I’ve bought a lot of cougar tags over the years, but I’d never notched one. This was special.”

They called a taxidermist and got instructions to immediately bring in the carcass whole so it could be properly skinned for mounting.

But as they dragged the cougar up the hill, recounting the action, Hendrickson said from his view he thought the cougar had presented a broadside shot. Noah agreed.

“We look at the cat and the wound is right in the middle of his chest,” Noah recalled. “I said, ‘That’s not right.’”

They went back to the site of the shot, pieced the episode together and soon found the other cougar – dead in the brush just 15 feet from where they had found the first one.

“He hit both cougars with one shot and they ran a short way and died almost right next to each other,” Hendrickson said.

“I had a tag and the first thought was for me to just tag it and that’s that,” he said. “But then we wouldn’t be able to tell the story, which is too amazing.”

Washington regulations allow hunters to buy one cougar tag. Shooting another cougar without a tag is prohibited, and it also would have been illegal for Hendrickson to tag a cougar someone else had killed.

“So we called the game warden,” Noah said. “I didn’t know how it was going down, but we figured that was the right thing to do.”

Washington Fish and Wildlife Department officer Severin Erickson showed up within an hour and investigated the case.

“Their story all checked out,” he said. “Technically, it would be double-bagging – two cougars with one arrow – but it was an honest mistake. Legally, they’re required to check in with us and they did. Officers have discretion in these cases. I had to give him a warning, but there was no citation.

“I thought it was pretty cool, what happened and that they called us. I allowed his hunting partner to use his tag on the other cougar so the animal wouldn’t be wasted.”

Erickson said his options would have been more limited had Hendrickson illegally tagged the second cougar.

“Word often gets out and things can go downhill from there,” he said.

The cougars were two young males, one about 110 pounds and 56 inches from nose to butt, while the one that had been arrowed by mistake was about 95 pounds and 50 inches.

“It’s unusual for two males to be traveling together this time of year,” Erickson said. “But one thing I’ve learned for sure about cougars is that every time you think you have them figured out, they do something different.”

The hunters took both cougars to a taxidermist for remembrances of their once-in-a-lifetime hunt.

“It came close to being even better,” Noah said as an afterthought. … “I had a bear come in earlier that day. It was small, so I passed it up. But I could have taken it.

“Then, at the end of the day, I had a bull elk going. He was right there, but he hung up on the hillside until daylight ran out.

“I almost hit the jackpot that day.”