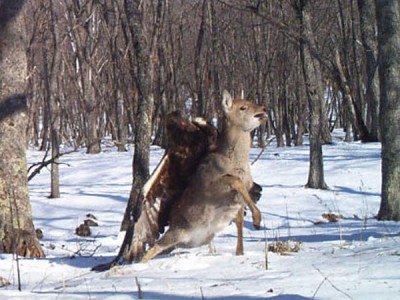 Field Cam Captures Eagle Taking Down a Deer!
By OutdoorAly

A camera trap intended for Siberian tiger research in southeastern Russia instead captured a golden eagle wooping on a yearling sika deer on December 1, 2011.

The camera trap caught two seconds of the attack, starting with the photo above, which ended badly for the deer—a healthy yearling estimated to be at least seven months old. 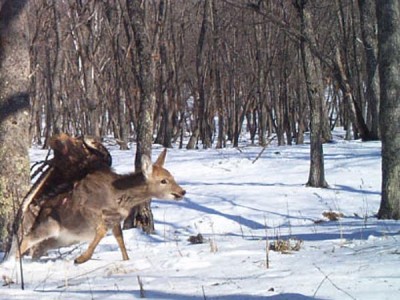 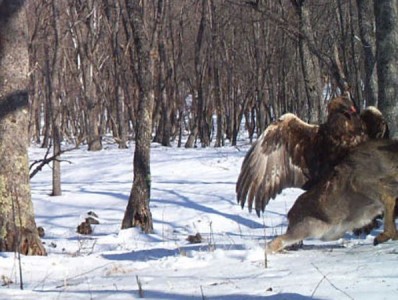 In a Journal of Raptor report by Linda Kerley of the Zoological Society of London and Jonathan C. Slaght of the Wildlife Conservation Society Russia Program, the camera trap team describes the fortuitous photos as likely the first documented golden eagle attack on a deer, although field reports suggest the birds also prey on reindeer, mountain goats, and brown bear cubs.

“I’ve been assessing deer causes of death in Russia for 18 years—this is the first time I’ve seen anything like this,” Kerley said in a Wildlife Conservation statement on the camera-trap images.

The researchers checked the photos from the field camera only after finding the deer, dead in the snow nearby.

“There were no large carnivore tracks in the snow, and it looked like the deer had been running and then just stopped and died,” Kerley said in the statement. She and her colleagues pieced together the attack from these three images, culled from more than 7,000 collected by the camera over five months.