Two separate grizzly bear sightings since Sunday near the Sun River west of Great Falls have prompted state wildlife officials to alert homeowners and hunters in the area.

On Sunday, Sept. 22, a bowhunter spotted a pair of subadult grizzlies about a mile east of Simms near the Sun River.

On Wed., Sept. 25, a homeowner took photos of a grizzly running by her house about a mile southeast of Fort Shaw.

“This is the furthest east on the Sun River we have confirmation of grizzlies,” says Mike Madel, Fish, Wildlife and Parks grizzly bear management specialist.

Based on the Fort Shaw photos, Madel estimated the grizzly to be 3 to 4 years old and about 300 pounds.

“These bears are really healthy,” he says. “There is a super abundance of chokecherries and buffalo berries along the Sun River.”

The bears have not caused any problems but Madel said people in the area should remove possible bear attractants.

“Take in your pet food at night,” he says. “Take down any birdfeeders and don’t leave out unsecured livestock feed or garbage. By mid-December the bears should have moved back into mountain drainages for the winter.”

Hunters along the Sun River, both bird hunters and archers, should be especially careful when entering thick cover and carry bear spray. 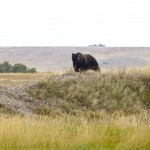 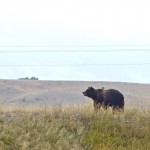