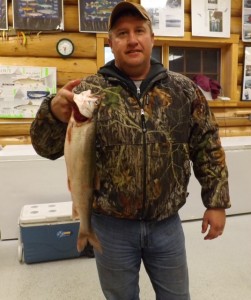 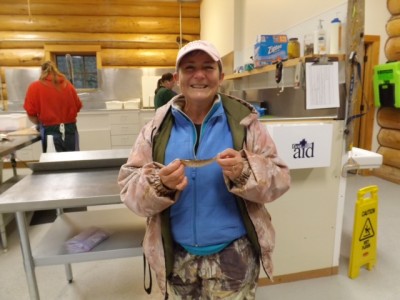 Deana Knipe with her smallest lake trout entry of 152mm.

Anglers have reached the half way mark of the 2013 Fall Mack Days Fishing Event. Up to $125,000 in Cash and Prizes will be awarded to the angler’s at the conclusion of Mack Days. Whitefish angler Roger Schiff won $5,000 on Saturday with a tagged lake trout. Schiff was fishing with friend Phil Meredith of Kalispell when he caught the lucky tagged fish at Bird Island. The lake trout had been tagged in the same area Oct. 3rd. Both anglers had a tagged fish to turn in. Phil’s fish had a tag worth $100. There is still four $5,000 tagged lake trout-1-$10,000, 10-$1,000 and over 4500 with values from $100-$500. Mack Days are sponsored by the Confederated Salish and Kootenai Tribes and sanctioned by Montana Fish, Wildlife, and Parks.

Friday’s total entries were 784, Saturday-595, and Sunday-263. Total lake trout entered in the event so far is 8,449 which is 1,938 over the 2012 total after 12 days and 753 shy of the 2011 12 day total. The weather warning of high winds on Sunday was right on with most anglers making the choice not to chance going out at all and other anglers coming in off the water in the late afternoon when the winds began. Once it began there was no place to go if you weren’t close to a boat ramp. One angler spent the night on Bird Island waiting out the storm. This is a reminder to everyone to have good safety equipment for an emergency situation-anchor with good long rope, PFD-best life vest you can afford, extra clothing, hat and gloves, water, food, flashlight, cell phone, etc. You never know when it will be needed.

Entries are taken until the last day of the event. You can enter on line or enter when you bring your fish in. There are four places to enter your fish. Check out the website for locations and times.