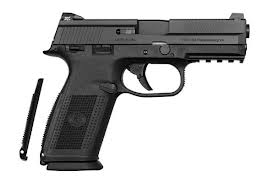 The FNS 9 is a semi-auto service pistol introduced to law enforcement in 2011 and the pistol is now available for civilian purchase.At first glance the FNS 9 appears to be just another striker fired, polymer framed handgun with a four inch barrel and is chambered in 9mm. The gun has a fully ambidextrous manual safety lever, slide stop lever, and magazine release; a real plus for southpaws. It is also available without the manual safety. 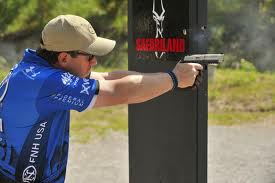 Fixed 3 dot sights are standard with 3 dot night sights as an option. A MIL-STD 1913 accessory rail is included on the dust cover, 17 round magazines, 2 interchangeable back straps, and your choice of a black or stainless slide round out the package. 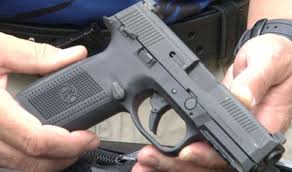 As I said, at first glance this seems to be just another plastic, striker fired gun; but a closer look and some rounds fired downrange changes that impression. My first interaction with a FNS 9 occurred last June in a NRA pistol class that I was conducting in Missoula. One of my students had a new FNS 9 and was having a bit of trouble centering the gun on target. It appeared the gun was shooting a bit low. I tried it and found it shot to point of aim. 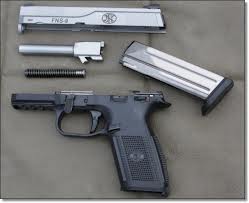 A little work with grip and stance soon had the student on target. During class, my attentions are focused on range safety and my students’ progress, so that day I didn’t pay much attention to the pistol’s performance.
About 6 weeks later I had the opportunity to really give the FNS 9 a try and I was mightily impressed with its performance. I have shot a lot of DA polymer guns over the years and I have owned and been shooting an S&W M&P 45 for about 6 years. As you can guess, I really like and enjoy my M&P. The FNS 9 is the first polymer pistol that I  would consider an equal to the M&P. 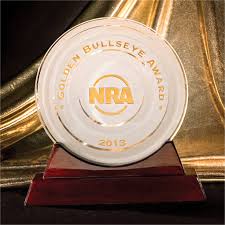 I loved the FNS 9. I rate its trigger as one of the two or three best DA pulls I have ever shot. The gun fits the hand really well, making recoil management a snap with 9mm ammunition. I like a hand filling grip on a handgun and the FNS 9 didn’t disappoint; however the grip is one of the widest I have found on a polymer pistol. It is 1.55 inches wide as compared to 1.2 on an M&P or 1.18 on a Glock 17. I strongly recommend the FNS 9 for a personal defense gun; just make sure it fits your hand.
Last week, I mentioned that I had a little surprise for this post. FNH has a new FNS 9 model, the Long Slide. It has been tested in competition by the FNH shooting team for several years. It is an FNS 9 with a 5 inch barrel and slide. 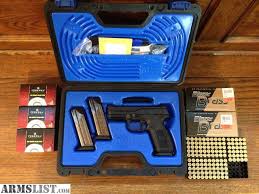 One of the FNH reps had one with him last August and he allowed me to shoot it as long as I didn’t tell anyone about it. The secret is now out as the gun is in the catalog and listed on the FNH website. I might have been the first Montanan to try the new gun. It is terrific; everything good about the FNS 9 with the longer sighting plane of the 5 inch slide; it is a real shooter. I shot a lot of other guns on that Saturday in August, and I talked to a lot of factory representatives. I found the FN guys knowledgeable and really fun to deal with, and the FNS 9 Long Slide a shooter’s delight. I guess I have another item for my bucket list.