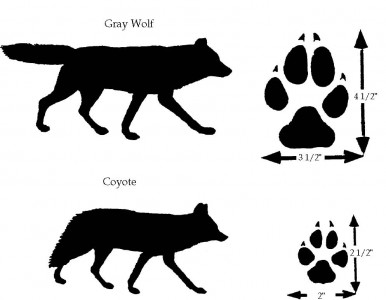 Identifying Coyotes and Wolves
By angelamontana 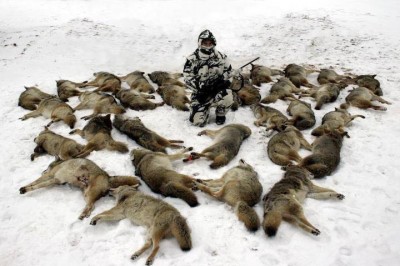 (photo courtesy of Justin Hamilton on Skin Em Out’s Facebook page — these are coyotes, not wolves)

I recently saw an article posted online that was written by somebody who is against wolf hunting, and they captioned a picture with several “wolves” that were slaughtered by a hunter.  The article had other pictures of what he referred to as wolves, too.  The problem is that, the picture with dozens of “wolves” did not even have a single wolf in it.  They were coyotes.  In fact, every picture in the article, with the exception of one, happened to be coyotes that the author labeled as wolves.  Misinformation is a big problem when dealing with the wolf issue.

Just so you can be sure that the wild dog in your crosshairs is the wolf you were aiming to shoot or the coyote you were after, here are some tips on identifying wolves and coyotes by huntwolves.com:

First, and most obvious, wolves are much larger than coyotes.  Coyotes typically weigh in from 25-55 lbs, while even the smallest adult wolf generally tips the scale at 60lbs or more. Large males can easily weigh 150lbs. The average coyote also only stands about 1.5 ft tall, and the average wolf about 2.5 ft tall. Size, however, is not always a fool proof indicator, because the sizes of a large coyote and pup wolf would likely overlap.

Coyotes are generally thinner, sleeker, and more agile than a wolf when moving. Wolves are bulkier, have rounder ears on a blockier head, and are not nearly as light on their feet.  Coyotes also only come in shades of gray, and speckled brown. Wolves can range from white, to light gray, to black.  If you’ve considered all these things and still can’t determine what the critter in your crosshairs is, it’s probably  wise to ease off the trigger. 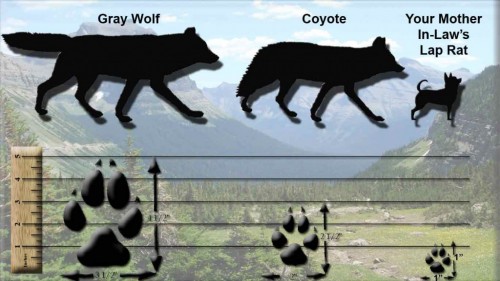 The huntwolves.com article also touches on the fact that because you can shoot coyotes year-round in Montana, Idaho and Wyoming, it isn’t a big deal if you get one that you thought was a wolf, but if you shoot a wolf thinking it is a coyote, that can be a different story.  So, as with all hunters, just know the animals that are in your crosshairs.  And GOOD LUCK!