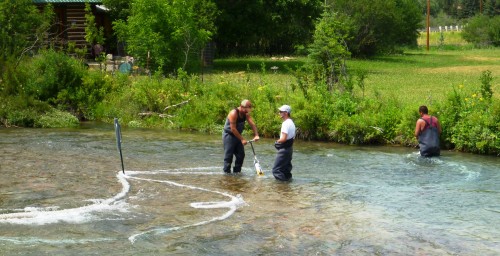 While last week was all about mule deer, and the week before was big on bears, this week I’m all about fish and fisheries. (Not that I’m ignoring the opening of the big game rifle season.) Over in Lewistown, Fish, Wildlife and Parks is in the process of acquiring about 24 acres of property along Big Spring Creek, the popular fishery that flows right through town. These parcels will add two more fishing access sites to the six that already exist, that’s good news for anglers. Also on the plus side, FWP announced that the cleanup of the upper portion of the creek below Big Springs Trout Hatchery has been completed, provided that follow-up tests show that contamination of the creek now falls within Environmental Protection Agency guidelines. The final step of the cleanup was dredging about 3 miles of the creek bottom to remove silt containing paint chips contaminated with PCBs from the hatchery. About 1,500 tons of sediment were pulled from the creek and trucked to a Great Falls landfill.