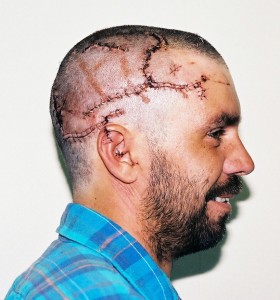 It’s a grizzly weekend in Billings on Saturday and Sunday. No, not because the University of Montana football team plays a tough road game, although I hope to watch that. Instead, I’m talking about the real deal – grizzly bears. On Saturday morning, Sundance, Wyo., hunter Terry Everard will give a talk about his painful encounter with a grizzly bear 21 years ago while hunting bighorn sheep in northwestern Wyoming. The bear bit his head, arms and shoulders when it was disturbed while lying in its day bed. His tale of survival – he received more than 250 stitches during three-and-a-half hours of surgery – is a good reminder that now is the time to be cautious while quietly roaming the woods for deer, elk and moose. Everard is a big advocate of bear spray and carrying it where it’s easily and quickly accessible, not in a backpack. Then on Sunday in The Gazette I have a story about Dillon photographer Pete Bengeyfield’s encounter with a grizzly bear boar feeding on a bison carcass as wolves circled. Then a sow and three grizzly cubs arrived to add to the action. He captured some great shots of the event, which took place in Yellowstone National Park in mid-September, before the federal government shut down access to the park.

Here’s a link to the Everard story: http://billingsgazette.com/lifestyles/recreation/grizzly-attack-victim-to-speak-on-saturday-in-billings/article_b14ba69d-ddad-5917-95f9-c1c56e7f6209.html