Hunting with the Captain: Captain’s Column
By angelamontana

Hunting in Montana for me is now in full swing. Last week I spent a week in Eastern Montana hunting elk with my bow. I was the guest of Kelly Burke from Burke Ranch Outfitters. Burke runs a very successful archery elk hunting camp along with his wife Tami, with additional help from Bob Bailey who cooks and keeps the camp organized for the comfort of their clients.

Joining me for the second year in a row were Justin Bonomo from Colstrip and Scott Cole from Forsyth. Both of these guys have had success with Burke the past few years. Eastern Montana has not had to deal with wolves, at least not to the extent that Western Montana has. So the elk are plentiful and they have not had to change their fall patterns because of the wolves.

I have hunted in Southwest Montana and have gone days without seeing an elk, but in this area 55 miles south of Malta that is certainly not the case. Every day I was able to spot elk from a reasonable distance and prepare for a stock and hunt opportunity. It adds a measure of fun into your hunting day when you know there are elk to be hunted that’s for sure. Bonomo and Cole had an elk perfect day on Tuesday when Bonomo bagged a spike and Cole a cow. To top the camp success off, Bailey ended up getting a cow elk while hunting out of a blind at the end of the day. Three elk in one day, as far as archery success goes, is quite an accomplishment for any elk camp. Cole wasn’t done however as he had his general elk tag to fill. Burke, Cole and I went hunting on Thursday morning. 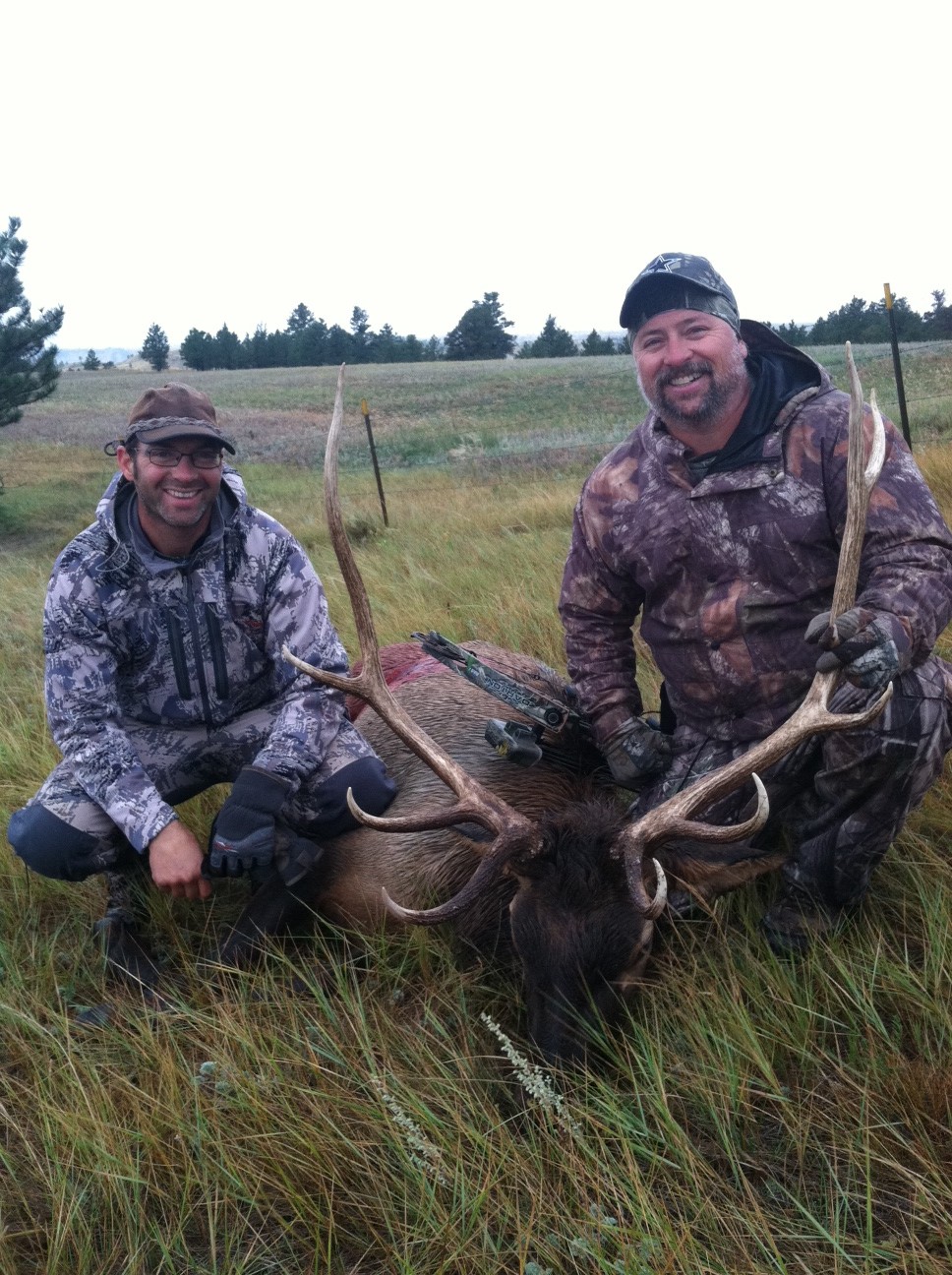 The weather had changed from highs in the 80’s to rain showers with the daytime high temperature expected in the 50’s. Ideal weather conditions for archery elk hunting. We walked for about an hour in the dark to get where Burke expected some elk to be feeding that morning. As soon as we arrived we spotted a bull elk crossing a fence, as he was headed to a nearby alfalfa field. Burke started to cow call and the bull turned right around and jumped back over the fence. Now in an instance he was headed in our direction looking for the cow that he had just heard. Burke placed Cole at a spot that he thought he would be able to get a shot at the bull and moved behind him about 20 yards and continued sound his cow call. Within seconds the bull elk was standing in front of Cole at about 35 yards broadside. Cole drew his bow and let the arrow fly and it hit the elk right in the vitals. I had a front row seat for the whole experience and the excitement and adrenaline for me was at an all time high, I could only imagine what was going through Cole’s mind. Burke had done his job and Cole did his.

Waterfowl season opened last Saturday and it appears that this will be a great year for duck and goose hunters as the populations for geese and ducks is high all across Montana. Saturday on our annual Goose Blind Broadcast 13 hunters ended up with 29 geese and 45 ducks. 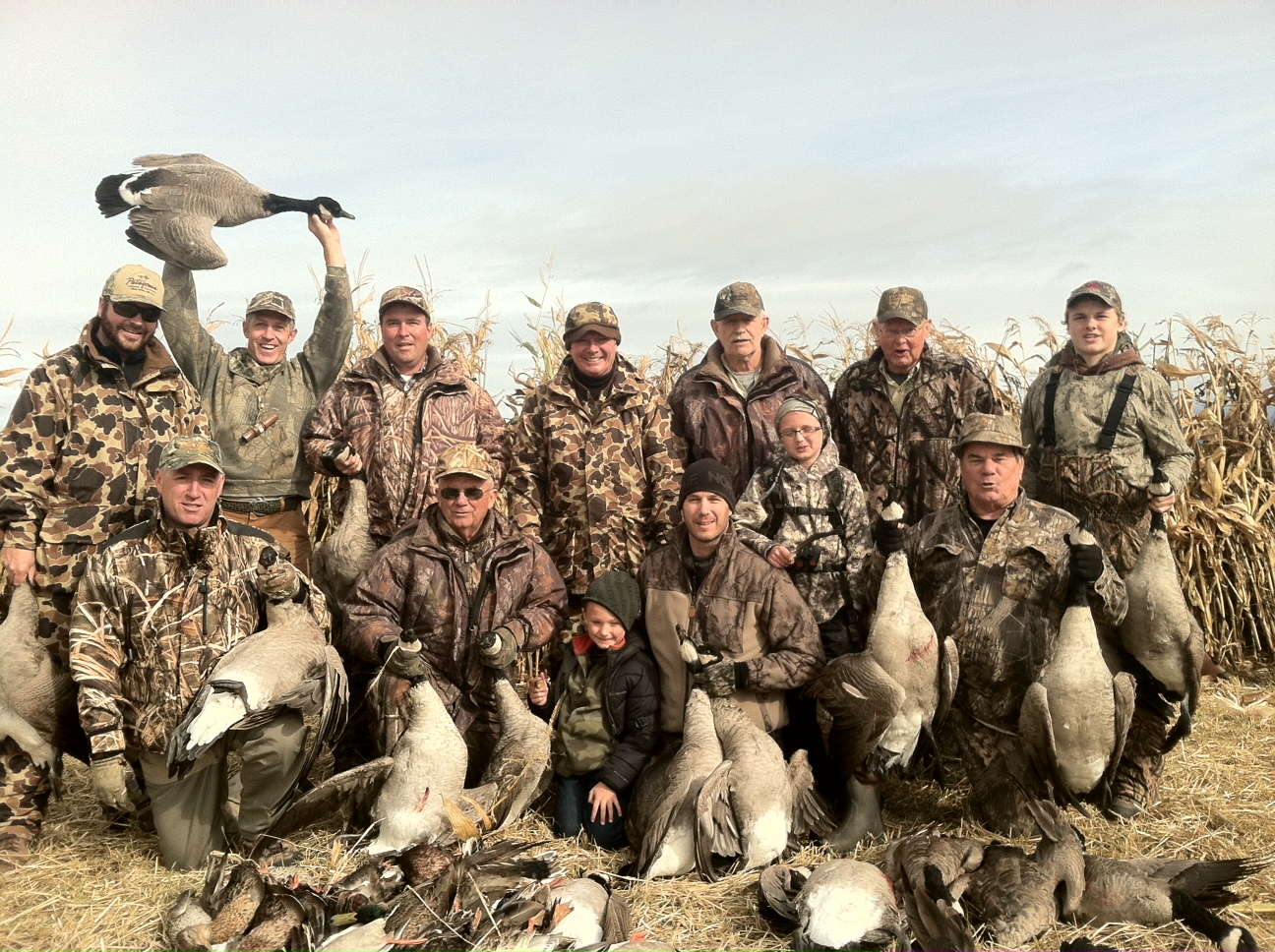