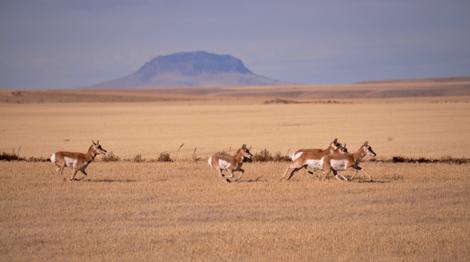 BILLINGS — Numbers of hunters and animals harvested in south central Montana were near historic lows for the opening weekend of the 2013 general antelope season.

At all three check stations, the number of hunters was near the smallest since FWP started keeping records, despite near perfect hunting conditions on Saturday. Harvest was lower only in 2008, when an early winter storm clogged the region’s fields and roads with snow and mud for the one-day opening weekend.

Biologists chalked up the low 2013 harvest numbers to low numbers of antelope in the field. Game surveys earlier this summer showed that herds throughout south central Montana have not fully recovered from factors, including bluetongue disease, that surfaced about five years ago. FWP issued fewer antelope licenses in some hunting districts as a result of low antelope numbers.

Of the antelope checked at Billings, 57 percent were four years old or older and all but seven were adult bucks.

At Broadview, FWP wildlife biologist Ashley Byers checked 170 hunters, the lowest number on record (in 2008 the station did not operate because of winter weather). Hunters had harvested 58 antelope, up slightly from 54 last year, but well below the long-term average of 180 animals for opening weekend.

Of the antelope checked by Byers, 76 percent were bucks at least 1.5 years old. The long-term average for such bucks is 62 percent.

During the two-day opening weekend, Paugh checked 285 hunters with 119 antelope for a harvest rate of 43 percent. That was 39 fewer hunters and 46 fewer antelope than the same weekend last year. The numbers were the lowest since FWP moved the opening day to Saturday from Sunday in 2010. They reflect the fact that FWP issued fewer licenses this year in some hunting districts because of low numbers of antelope.

Montana’s 2013 general antelope season runs through Nov. 10. The general elk and deer seasons run from Oct. 26 through Dec. 1. A special youth-only deer season is open Oct 17 and 18 throughout Montana.