Has this Toad gone Batty?
By angelamontana 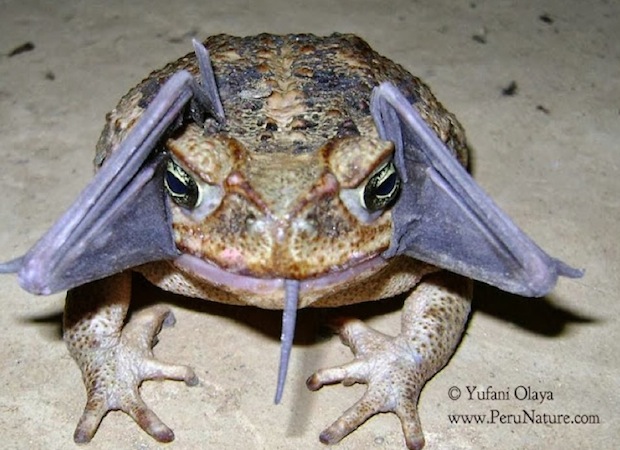 We’ve most likely all seen a toad at some point while we were out fishing or hunting–and the same goes for bats.  But, have you have ever  wondered what a toad and a bat might look like if they were morphed into one animal?

The animal pictured above is no alien.  Actually, it turns out the odd creature is merely a toad with a bat in its mouth.  Apparently, the toad was sitting there with its mouth practically wide-open when a bat flew right into it.  The toad was not going to waste this opportunity for a meal, but did he end up finishing his tasty winged meal?  Check out the full story below, posted by grindtv.com, to find out:

A park ranger in a remote Peruvian forest recently encountered a creature that appeared to be some sort of alien.

It was short and stumpy, with large purplish ears protruding from the sides of its mottled brown head. It’s tongue, also purplish, was long and pointy.

But upon close inspection the mysterious creature turned out to be a ground-dwelling cane toad, which somehow had just caught a bat.

Yufani Olaya, the ranger who was patrolling in Cerros de Amotape National Park, supplied the image to Rainforest Expeditions. The eco-adventure company posted the photo on its blog under the headline:

“What the heck is going on in this picture?”

Phil Torres, a wildlife biologist and author of the blog post, writes: “We’re unsure how common this is, but we do know that this is probably the first photographed record of a cane toad feeding on a bat.”

How on earth could a ground-dwelling toad catch a bat?

Olaya provided the answer, saying that “out of nowhere the bat just flew directly into the mouth of the toad, which almost seemed to be sitting with its mouth wide open.”

Some bats do hunt close to ground level and will even pluck prey from the ground.

Asked by Torres if the toad was able to enjoy its oversized meal, Olaya answered “no” and added that the bat actually got away.

Torres explains: “The toad finally gave up and spat it out. While Olaya at first thought the bat was dead, he said it slowly recovered and was able to fly away. I’m sure it won’t make that mistake again.”

(Information and photo via grindtv.com)