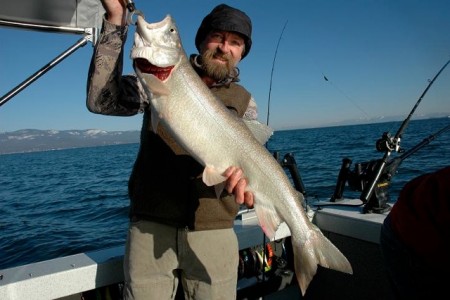 The 2013 Fall Mack Days Fishing Event continues with a total of 10,061 lake trout entries. The event continues through November 17th with the last 10 straight days of fishing beginning on Friday November 8th. Sponsored by the Confederated Salish and Kootenai Tribes-Mack Days are used as a tool to reduce the non-native lake trout in Flathead Lake. Native bull trout and westslope cutthroat trout numbers have declined in numbers over the years from where their numbers historically once were. Bull trout were once very abundant in the Flathead system. Some travel up into high-mountain streams in the upper Flathead to spawn with a few that even make it into Canadian tributaries and others moving into Glacier Park streams and lakes. They are an important part of tribal history and an important part of the history of Western Montana. Mack Days are sanctioned by Montana Fish, Wildlife, and Parks.

Up to $125,000 in Cash and Prizes will be awarded at the conclusion of the event on November 17th with a fish fry beginning at 4:00 and awards at 5:00 at the Blue Bay Campground. Entries continue to be taken until the last day. All it takes is one fish to receive a ticket for the lottery drawings. Lake trout spawn in the fall and come into shallower areas along the shore. Shore anglers have been reporting some success using bait or casting with spinners. Boat anglers are catching lake trout jigging, casting, and trolling. Come out and try your luck.

There is still a $10,000 tagged lake trout-4-$5,000, 10-$1,000 and over 4500 with values from $100-$500. One $5,000 tagged lake trout was turned in on October 26th by Roger Schiff of Kalispell. Anglers Tim Mooney and wife Jeanee were very lucky over the 5th weekend and turned in five $100 tagged lake trout on Friday and Jeanee had another on Sunday. Casting towards shore in the steep rocky areas their catch for Friday was 108 lake trout. Several other anglers turned in $100 tagged fish over the weekend-Bill Swaney-Missoula, Phil Meredith-Kalispell, Steven Benson-Four Lakes, WA.X2, Roger Dilts-PolsonX2, Terry Krogstad-Kalispell-X2, Mike Benson-LonepineX2, Bob Syvrud, Deana Knipe-Polson, Richard Kreis-Huson . Chad Woolstenhulme of Driggs, Idaho, Craig Morigeau-Polson, and John Gauci-Missoula turned in $200 tagged fish.

Jeanee Mooney leads the ladies with 282 lake trout and sits in 12th place over all. Second in the ladies category is Deana Knipe of Polson with 106 and third is Laurie Kreis of Huson with 102.

Smallest lake trout entries are still held by Deana Knipe of Polson and Dan Smith of Columbia Falls, There is no large lake trout entry so far in the event which is not unusual for a Fall Event. The large lakers seem to be harder to find in the fall.

Last day of the three Bucket of Fish Days will be on Sunday November 10th. The Kreis team leads with 18 pts., 2nd is Meredith/Schiff-12 pts., third-Dilts with 8 pts., fourth is a tie with Christensen, Mooney, and Krogstad. Ties will be decided by total bucket weights. Anglers place their four heaviest fish under 30 inches in a bucket for a weight. Heaviest bucket has been one turned in by the Kreis team of 22lbs. 10ozs.

Youth angler Eric Sam’s-Polson continues his lead in the 13-17 categories with 45 and Dylan Hodgson of Kalispell in the 12 & under leads with 23.