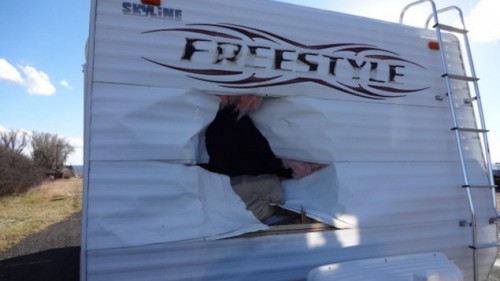 Buck Crashes through Travel Trailer and Found Alive Inside
By angelamontana

When we’re hunting, the idea of a buck coming to us is ideal, but that typically just is not the case…but, sometimes it is the case.  Apparently, a woman towing a travel trailer in Utah was chosen to be the company for a three-point buck.  Here is a very bizarre story from ksl.com:

A buck surprised a sheriff and a driver after it ended up in the trailer the woman was hauling.

About 3 p.m. Sunday, a woman driver hauling a travel trailer called the Garfield County Sheriff’s Office saying she had hit something while traveling on Highway 89 just outside of Panguitch. When Conservation Officer Micah Evans arrived, he noticed a hole about 2 feet in diameter in the side of the trailer, a sheriff’s office spokesperson said. No blood was on the trailer.

As he opened the trailer, he expected to find a dead or injured animal, but saw a three-point buck in good health.

Standing in the doorway, Evans took a picture with his camera of the buck. The flash went off and the buck sprang toward the doorway, Evans jumped out of the way, then the buck leapt over a barbed wire fence and ran away, according to the sheriff’s office.

“All involved were a bit stunned by this strange occurrence,” the sheriff’s office wrote in a press release. “Sheriff Perkins on the scene jokingly said to the woman, ‘We’re going to have to fine you for hunting without a license,’ to which the woman replied ‘But I didn’t kill it.’ “ 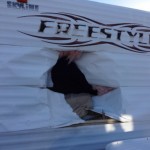 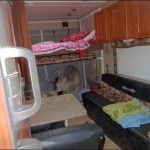 (Information and photos via ksl.com)