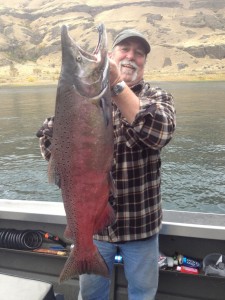 Fishing in the Northwest: Captain’s Column
By angelamontana

Hunting is in full swing whether you are a waterfowl, pheasant, antelope, deer, elk or wolf hunter. Hunting presents quite few opportunities but reports that I have received indicate anglers are still out there having some fun. I spoke with the Mountain Man John Perry the local outfitter out of the Rock Creek area and this is what he had to report in an e-mail to me, “My preference right now would be Rock Creek and the Missouri River. Once the warmth of the day comes-Congo caddis in sizes 10 and 12 are working on both waters.

On Rock Creek you can drop off a # 14 bead head pheasant tail or prince nymph about 30 inches and dead drift it. You may catch the occasional white fish in between the trout catches-but still fun. We are still seeing October caddis on the middle part of the Missouri and are fishing the Congo caddis with a dropper at times-especially if we get into some pods of fish with an attitude. You may want to use the Congo caddis (or something similar) with #16 droppers-about 10 inches below the dry and at the end of the drift as it goes through the pod-let it swing and get ready for some fish to hit on the light lift up. Colors of the droppers we are using are: white, olive, peacock, dark red and bright green. As of last week this was our best technique for lots of nice fish on the Missouri River”.

Chad Houk from Missoula and some fishing buddies have had some recent success fishing salmon on the Columbia River in Washington and then salmon and steelhead on the Clearwater River in Idaho. Bob Thomas, Tommy Thomas, Matt Bennet, Spic Coli and Houk from Missoula and Stevensville made the trip over on the Columbia River in the middle of October. “It was a great trip where the first day we hooked 29 salmon and the second day we hooked 35”, said Houk. Then Houk , Ryan Zieg, and James Jones from Missoula did very well on the Clearwater River in Orofino Idaho from Lenore to Cherry Lane fishing for salmon and steelhead. “Despite the river being low the bite was on,” added Houk, “side-drifting eggs seemed to be the best technique for us”. The trio ended catching 26 king salmon and 2 steelhead for their efforts. You may view pictures from both of those successful fishing trips below.

Up in Northwest Montana Chancy Jeschke from Snappy in Kalispell reports that fishing for Grayling on Rodgers Lake is good, “Rodgers Lake is still doing well fly fishing for graylings up to 18 inches, and there are some nice cutthroats in there also. Ashley Lake there’s been some nice reports on some big perch and occasional cut bows. There have been a few reports on the Bitterroot River, not a lot of reports of the big rainbows but the smaller 1-2lbs have been good with spoons, Thomas’s, Lyman Plugs, picking up some decent rainbows”. Remember also that Fall Mack days on Flathead Lake is in progress and the fishing has been good from shore and from a boat. 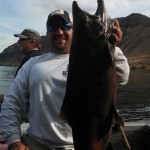 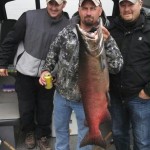 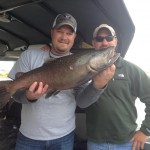 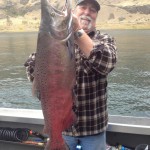 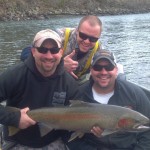