After a slow start, the 2013 hunting season took an upward turn over the weekend with the advantage of tracking snow in most west-central Montana locations.

Hunter trips and elk and white-tailed deer totaled through hunter check stations in Montana Fish, Wildlife & Parks (FWP) Region 2 are up from last year at this point, and the percentage of hunters with game was higher this week than last.

“Fresh snow and the onset of the deer rut helped boost hunter success at the Bonner check station this weekend,” said Jay Kolbe, FWP’s wildlife biologist in Seeley Lake. “Although hunters brought several trophy-class bucks through the check station over the weekend, most harvested deer were less than three years old. These younger bucks reflect the relatively good white-tail fawn recruitment we’ve been seeing in the Blackfoot since 2010 and hopefully indicate that populations are beginning to increase.”

White-tailed deer harvest through Bonner lagged behind last year’s totals in the first two weeks of the season, but surged ahead of last year’s pace in week three. The reported harvest of 188 whitetails so far this season is 3% higher than last season’s three-week total, and 9% above the four-year average.

“By this time of the season, elk have found their sanctuaries—whether on private land or in tougher country than most hunters will tackle,” said Mike Thompson, Regional Wildlife Manager. “Once they have reacted to hunting pressure and settled in, it takes a lot of snow and some severely cold temperatures to move them. We’ve not had enough snow and it’s been way to warm to move elk yet,” said Thompson.

Activity through the Darby check station is up in every major category. Hunter trips totaled 4,894 for the first three weeks of the season, up 23% from last year. The elk harvest of 231 is 24% higher than last year, but 4% below the five-year average. White-tailed deer harvest through Darby is the highest since 2006, with 115 checked, and the mule deer harvest of 70 is the highest for this time of the season since 2009.

Totals from the Anaconda check station are generally low, with 1,009 hunters, 39 elk, 11 mule deer and 9 white-tailed deer checked so far.

FWP wildlife biologist, Vickie Edwards, is operating a check station at the mouth of Fish Creek for the second season. So far, Edwards has checked 945 hunter-trips, up 11% from last year. Totals of 30 white-tailed deer, 11 mule deer and 1 elk generally are on par with last year. 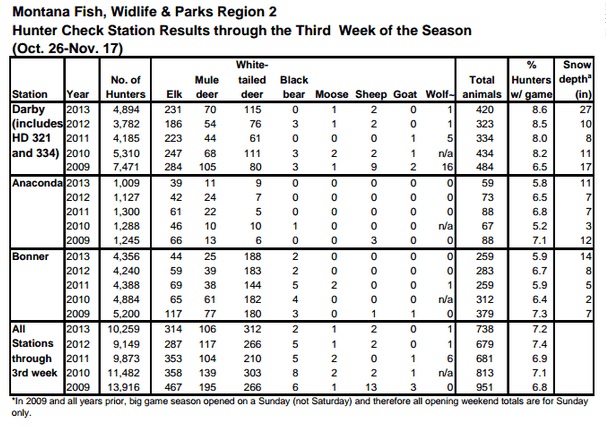