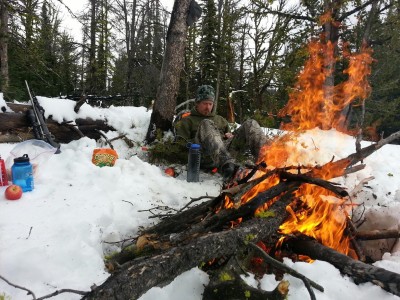 “Track Soup” by Trevor Johnson of Kit’s Tackle
By angelamontana

IRST AND FOREMOST…A HUGE SHOUT OUT TO ALL THE SERVICEMEN AND WOMEN THAT SERVE OUR COUNTRY. I get goose bumps looking up to each of you brave and awesome folks who serve or have served. Thank you and KUDOS!! 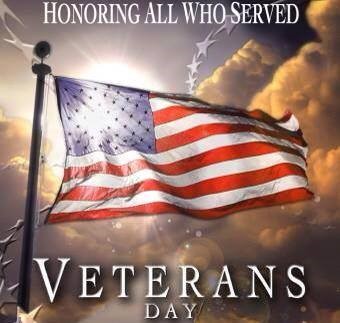 I don’t do this much during hunting season, but today I am giving some much needed rest to my beat up legs. I have been on a wicked runner chasing elk up one mountain and down another. After having a great conversation with Mark Ward (your very own Captain of the Montana Outdoor Radio Show) I decided to share some of my adventures and experiences with tracking elk. Before I start into the technique, keep in mind these are my methods I have learned from my father and from hundreds of hours in the field. I’m not saying they are the best methods, but they have put elk steaks in the pan many a time. With this being said, I have also come home to a cold pot of “track soup” more times than not in my adventures. 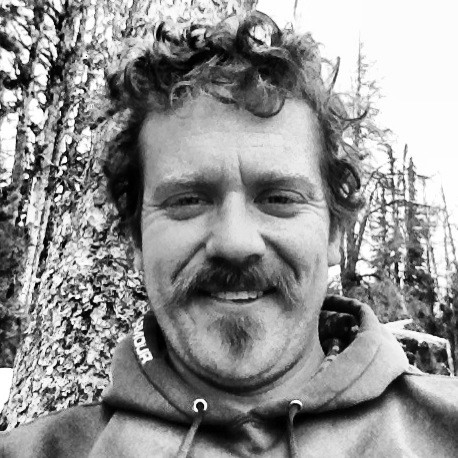 Yours truly stoned on hunting bulls in the 406

Yesterday was the perfect example; it was the first good hunting day in a long time. We have had very crunchy snow which inevitably makes tracking pretty difficult. Yesterday with the warm temps the snow fell soft and silent and the chase was on. Heading up a ridge right at daylight, my eyes caught that glorious silhouette of elk meandering through the timber. Staying calm, I slowly knelt down and started scanning for horns. Hunting bulls in timber in large herds is very difficult…there is just too many eyes waiting to bust you. Hoping I would get lucky before the wind switched, I waited patiently for a bull to reveal himself. It was just then I felt a slight tickle against my neck and knew the wind had switched…every head shot up like a rocket and the whole herd stampeded off like the buffalo in the movie ‘Dances with Wolves’ on surround sound! Wishing things would have worked out different, I headed up to the blow out zone and started looking at tracks. Seeing at least two mega hooves I knew there was a good bull in the bunch. Taking a couple deep breathes; I slowly started side-hilling after the tracks.

Normally in this situation I would just leave these elk alone and come back in the evening and hunt, but sometimes with this many elk the bulls will break from the herd…and they did! Obviously cutting a fresh bull track is much better than tracking spooked bulls, but when a herd breaks up it can have its advantages. Picture this scenario, you and a couple others hunters head into the mountains and plan on splitting up to work a mountain. You know there are bears in the area, but there is also a lot of elk so you take your chances. Since you planned to meet at the top, you now know your hunting buddies should be getting close. You are a little spooked that you saw fresh grizzly tacks on the way up the hill though. Just then, in the thick timber you can hear something crunching through the snow coming in your direction. Do you wait to see if it’s your buddy or do you take off running like a little girl?? Guess it depends on the person…IN MY EXPERIENCES IT IS THE SAME WITH ELK. Some elk will bolt when they hear something coming and some will stay put to see if it’s another elk. ESPECIALLY IF YOU ARE TRACKING AN ELK(S) THAT BROKE AWAY FROM THE HEARD. Another handy tool…a cow call, not just for bow season folks. A little toot on the reed every couple minutes has stopped more bulls in their tracks for me than any other tool combined. I have killed a lot of bulls with the safety on using this technique…just not the monster yet. He always seems to serve me up a nice bowl of track soup with a side of elk poop. Not to mention he usually leads me into some horrendous heck-hole after seven hours of exhausting tracking. This is exactly what happened to us yesterday.

After tracking two bulls from daylight it was now almost 1:00 p.m. and they finally started doing their uphill “zig zag.” This is the Johnson’s term for get ready for a quick shot in the timber! Anytime a bull starts doing the “zig zag” it means he is about to bed down (I mean jeez…he has to be tired right?!?! I just chased him up five different flippin’ mountains.) It wasn’t another hundred yards and wham…two bulls stood up in their beds. The timber was so thick we couldn’t see if they were 230 or 380 class bulls and in that always lightning fast instant…they were gone. So here we were, probably six tough miles from the rig and exhausted so we did what any mountain slogging beast would do…we built a raging fire!! We spent the next two hours fueling the fire with wood and our bodies with calories and electrolytes before making the descent back to the vehicle. Were we disappointed?? Of course we were, but we hunted good and got to see the bulls; in the world of tracking everything has to be perfect to harvest the animal. It’s a lot like bow hunting, the animal has to come in perfect and present himself to make the shot. More times than not it’s about the experience and that filthy rotten taste of track soup in your mouth. Ohhhh, but when it does happen…it fuels you for a million more tracking adventures!!

Heck yes those are Jalapeno Cheddar Cheetos you see!! Delicious!!

-Always keep the wind in your face.

-GO SLOW…PAINFULLY SLOW!! Stop every couple minutes and glass the timber looking for the slightest ear twitch or horn flash. Elk are like ghosts…they just appear. Oh, and did I mention they can crawl down holes also;)

-BIGGEST MISTAKE TRACKERS MAKE…FOCUSING ON THE TRACKS THEMSLEVES. You can’t shoot the tracks folks…well I guess you could but I would save that ammo for the animals. This is a guaranteed way to serve yourself track soup and even I used to be guilty of this crime. Forget that the tracks are even there and keep your head up…only glance down often enough to be aware that the tracks are there.

-Be ready for a quick shot folks…this is the timber. On average in my experiences, if a shot even presents itself, you usually have 1-3 seconds to make it happen. Keep your guard at all times…just pretend you’re getting ready to jump a rooster pheasant the whole time!

-Determining sex in deep snow where tracks are hard to see. Check their beds, bulls urinate in the middle of their beds and cows at the ends. Bulls also dribble pee when they are walking. Look for broken limbs or dead pine needles knocked off overhead branches…this means racks baby!!

-FUEL, FUEL, FUEL!!! Make sure you have multiple water bottles and high calorie snacks or lunch to withstand the rigors of tracking elk. If there is a lot of water in the area bring a pump and if not I carry two large water bottles and a jug of Gatorade. A heavy pack is a must for winter elk tracking…trust me it’s worth it.

-Along with food and water, all the late season essentials. Tracking elk can leave you in some big country. Fire starter, winter hat, gloves, coat ect. And as important as them all…your GPS!!! I have relied on these devices many a time to get back to the ol’ Chevy.

-COWS AND SPIKES are much easier to track down and kill than mature bulls. If you have a cow tag or are in a spike area and want to harvest an elk…this is it! I can track cows and spikes down to a kill shot almost every time…they don’t know how lucky they are. Also, makes great practice for the wise old bulls. I have learned a lot tracking cows and spikes. 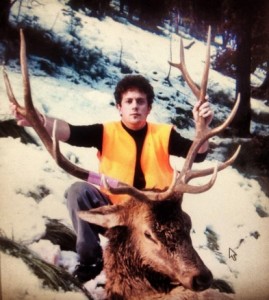 One of the most memorable bulls dad and I killed tracking

And always watch the weather folks…cold fronts always make for better hunting. As my wildlife biology friend Tim Swearingen (the best tracker I know) always says, “It’s all about Thermoregulation” meaning the elk have to feed heavier in cold weather to keep their core body temperature at the sustainable level.

Good luck and keep it safe!!