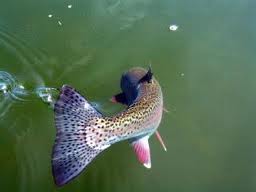 Fish surveys this year indicate rainbow and brown trout numbers remain above the long- term average in the Missouri River between Holter Dam and the town of Cascade, says a state fisheries biologist.

State fisheries crews this fall estimated 5,194 rainbow trout greater than 10 inches long per mile near the town of Craig on the Missouri. Not only is that above the long-term average of 3,174 rainbows per mile, but continues a trend of above average numbers over the past three years: 6,034 per mile in 2011 and 7,312 in 2012.

This year’s population was bigger in size and slightly lower in abundance than the past two years, says Fish, Wildlife and Parks fisheries biologist Grant Grisak, which is typical as the current population reaches its maximum size.

Next year, the population should return to normal levels, unless an unusually high water event occurs in the spawning tributaries, Grisak says. High water in the Missouri River tributaries typically results in high rainbow trout production.

Brown trout in the Craig section at 10 inches long and greater were estimated at 745 per mile. The long-term average is 578.

In the Cascade section, near the town of Cascade, the estimate for rainbow trout 10 inches long and greater was 2.260. The long term average is 1,551 per mile.

Brown trout in the Cascade section 10 inches long and greater were estimated at 447 per mile. The long term average is 387.