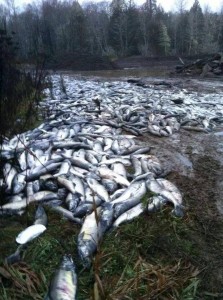 A disturbing picture of hundreds of dead salmon has been going around the internet, and people want to know why.  Apparently, the fish are killed and cut open and their eggs are taken while their bodies are thrown back into the water.  The Skokomish Tribe is offering the fish for free to local food banks and senior centers.

Here is the story by kitsapsun.com:

In a topsy-turvy seafood market, wholesale prices of salmon and salmon eggs are causing tribal fishermen to cast away whole fish.

They end up selling the eggs to foreign outlets.

What would be considered a “waste” of good fish in some years is standard practice this year, said Dave Herrera, fisheries manager for the Skokomish Tribe at the southern end of Hood Canal.

Large runs of coho and chum salmon have guaranteed adequate fish for spawning in Hood Canal streams, he said, so the tribe has not prevented fishermen from stripping the eggs and dumping the salmon overboard.

Herrera said he would like to see people use more of the harvested salmon, which is why the Skokomish Tribe is offering free fish to food banks, senior centers and other institutions.

Tribal employees load the salmon from fishing boats into the tribe’s 17-foot skiff and transport them to the Skokomish Reservation.

So far, about five food banks have taken a portion of the tribe’s catch. Hoyt Burrows of Bremerton Food Line picked between 800 and 900 pounds of salmon Monday afternoon and transported it back to Bremerton.

The fish will be cleaned today (volunteers are needed) and made available to Bremerton residents facing financial hardships.

Even with those efforts, only a fraction of the harvested salmon are brought to shore.

“Even if we could get all of the fish being caught, we would end up with tote loads of fish and nobody to take them,” Herrera said.

The effort to find uses for the fish may be stepped up next year.

“If we know we are going to have this problem, maybe we can plan better,” Herrera said. “If you could develop processing and storage … that would be the ideal way to go.”

Tribal fishing regulations prohibit wasting seafood. But, for the less valuable chum, the rule has been interpreted loosely in recent years to allow dumping fish in marine waters after egg removal.

This year, because of the large coho return, that interpretation was extended to the so-called silvers, which are prized by sport fishermen.

“I try to keep in mind that (tribal fishers) are their own independent businessmen,” Herrera said. “We have to figure out a way they can keep working and supporting their families. You want to be careful that your regulations don’t put everyone out of business.”

Salmon eggs are worth more than $5 a pound this year, compared to about 33 cents a pound for fish — if you can find a market and get them there, Herrera said.

Neither coho nor chum is considered threatened by federal authorities. Listed species are chinook and Hood Canal “summer chum” — an early-returning stock.

Some fishing practices are considered illegal by the tribe, Herrera said. Most beach seiners sift through their nets at the water’s edge and release male salmon and other non-target species, he said. Leaving fish to rot on the beach is illegal.

Brad Carey of Tahuya said he recently found about 200 fresh coho on the beach near Dewatto Bay. They were so bright they couldn’t have been there more than an hour, he said. He salvaged 145 — keeping some and giving others away.

Don Burger of Seabeck has observed similar incidents near his house. Nets were dragged up on the beach, killing cutthroat trout, perch and every kind of marine animal caught in the net, he said.

Herrera blamed the Seabeck incidents on one or two individuals working together.

“We know who it is,” he said, “and we’re investigating it. I’ve asked people to call me if they see a problem. If they take videotape of people dumping on the beach, we can use that as evidence.”

Burger said he would like fisheries experts from the tribes and state to work together to create sport-fishing opportunities in Hood Canal. Perhaps the tribes could profit from selling or renting fishing equipment or providing guide services, he said. It would be better than catching prized coho just to throw them away.

“The real profit is in sport fishing,” Burger said. “This could benefit both the state and the tribes.”

Unlike tribal fishermen, non-Indian fishermen are prohibited from discarding fish.

“I think the main reaction when you see a fish being thrown away is ‘What a waste,’ ” said Rob Zuanich, executive director of the Purse Seine Vessel Owners Association. “I tend to agree, so we don’t oppose state laws making it a crime to do it.”

Zuanich acknowledged that salmon caught by non-Indians in northern Hood Canal may be “brighter” and easier to sell than those caught in the Skokomish fishing area.