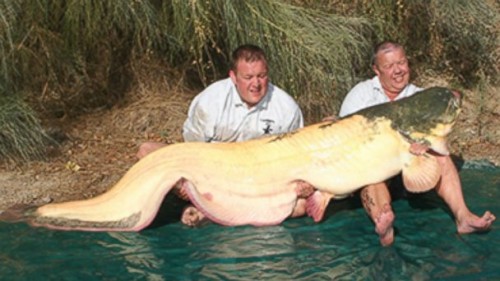 Just as Captain Ahab had his quest for the great white whale, Moby Dick, this British fisherman had his own quest to capture a different  albino beast; and it took him seven years to do it. The fish was a record breaking 8 foot-long and 206-pound rare albino wels catfish that was pulled from the River Ebro near Barcelona, Spain.

Bernie Campbell wasn’t expecting a record, but just wanted to bag a big one. And big one it was, beating the previous record by 10 pounds. Campbell, 54, fished with CatMaster Tours. The world record was previously held at 196 pounds, caught by CatMaster Tours’ Phil Hilton.

“We go out obviously to catch big fish,” Campbell told ABC News. “It’s just one of those things we joked about because they are 1 in 10,000, I would say.”

He described in a recent ABC News article how difficult it is to battle a beast that big:

“If you could imagine putting a rope on the back of a car, holding on to the rope and letting someone drive away, that’s what it’s like.”

The catfish was released safely back into the water after Campbell and his group took photos with it. Read more of the ABC story here.