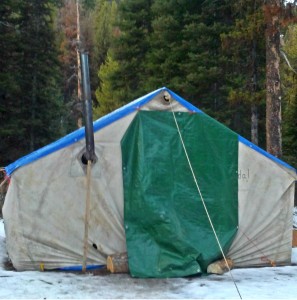 Last Saturday morning, I headed out to hunting camp for the week with a hunting crew that included:  Jason Maxwell, Randy & Coral Maxwell and Roan Ferguson.  We were also, later, joined by Steven Strohmer.

Every year, I seem to learn something new during my 10-day stay at the wall tent, during the last week of Montana’s big game hunting season.  And this year was no different.  (If you didn’t see last year’s post, click here).

Here are five things I learned/discovered/realized at Hunting Camp 2013:

1. Put a Comparison Object in Your Photo of Animal Tracks.  The first day I was out at camp, I didn’t see any animals, but I saw a lot of tracks from a few different types of animals.  So, I decided to take a picture of a particular set of bobcat tracks and showed them to one of the hunters I was camping with and realized that the track could easily be mistaken for a mountain lion track.  You couldn’t tell how large or small the track was without something to compare it to…  I know this is common sense, but sometimes, you might just be caught up in taking the picture that you may forget to put something else in the picture to show the size of the track, so make it a point to remember. Note the difference in the track pics when my GPS is included in the photo. 2. If You Have Long Hair, Pull It Back.  This one is for women and men with long hair.  Whether you’re brushing your teeth outside the tent or hiking up the mountain with your gun and pack, I suggest you put your hair back…or up…somehow.  Obvious, right? I realized that keeping my hair back not only prevents hair pulling via the gun sling and pack straps, but it also kept it out of my face.  I originally kept it down to cover my ears so my hearing wasn’t muffled by a hat, but, having very long hair and leaving it down, it only got in the way.  So, I ended up simply braiding my hair into two separate braids, which kept my ears warm and my hair out of the way.  No more spitting toothpaste in my hair or annoying hair pulling!

3. Pack Your Hunting Pack Accordingly.  Yeah, yeah, I know-another “duh”.  But, don’t forget to check the little things!  Before you go out hunting, you definitely want to go through your pack and get rid of everything you don’t/won’t need and keep it as light as you can.  I didn’t touch my pack for about 5 months until September and found that I had a whitetail shed, some bowhunting gear, some old candy bar wrappers and my 2012 hunting tags in the front pocket.  Being that I already got my deer, and I was out elk hunting, I lightened my load a little by sorting through necessities and non-essentials.  It was nice to know I was no longer carrying things I didn’t need around with me while I’m out in the mountains.  That terrain can be really tough even without the weight of my pack! 4. Dead Animals Don’t Always Bring in the Predators/Scavengers Right Away. After Coral randomly came across a dead elk while hunting in the mountains, I was looking forward to keeping an eye on that area for wolves, coyotes and whatever else might be compelled to check out the animal.  When she had found it, it was still fairly warm and you could still hold up its head and turn its neck, so it hadn’t died too long before then.  It is so sad to find dead animals, but it does happen.  Apparently, something had tried to take a chunk out of its hind end, as there was a big chunk of hair missing.  I immediately got the coordinates for the location on my GPS and headed to the elk that evening.  After a couple of hours, I decided to go back to camp just before sunset, with not even a bird finding the animal.  I was up and at the elk around 7:15ish to 7:30ish the next morning, certain there would be tracks after at least 24 hours of the dead elk lying there.  Nothing.  Not even an animal had walked by it. The weather had been sunny, blue skies and between 30 and 40 during the days all week so far, so at this point, it was starting to smell, but, still, nothing had come near it.  After a couple of hours, I headed back to camp, thinking I’d grab a bite to eat and head back up there after checking out a different area.  I arrived back at the elk just an hour and a half before sunset, and STILL nothing had gotten to it.  The next time I made it out, I knew for a fact there would be sign of animals, as, about 75 yards away, I could smell it.  But, upon my arrival, the only thing there had been on-site were the ravens.  Not one mammal, other than me and a hunter or two in our group, had made its way to the elk.  There are wolves and coyotes in the area, as we heard them quite often and their tracks were everywhere, but they never made it to the elk.  That just came as a shock to me, and I am assuming that because nothing had ripped it open enough to draw a lot of blood, the animals were not yet interested.  I imagine that when I go back to the area in two weeks, something will have found it by then, but it was surprising that nothing had touched it up to that point.  So, just because there is a dead animal doesn’t guarantee you will see animals on it within the first few days.  Other meals could, too, be keeping them away.

5. Garmin Handheld GPS Devices Are Waterproof for at Least 30 Seconds.  Yes, I did it.  I was THAT girl, and as I was crossing a log, my balance went off kilter, and my GPS slipped right out of my pocket and into the icy creek below me.  I watched in horror as it, literally, slipped right into the opening on the ice and into the moving water.  It felt like it happened in slow motion.  I told Steven, who had crossed the creek on a log approximately 10 feet away from me that I just lost my GPS in the water, and before I could even move, he had his jacket off, and was carefully scooting up the ice-covered part of the creek.  I could still see the GPS, as it fell in the water screen-side up and the light of the sky lit up the screen while it was submerged.  It was completely under the water for at least 30 seconds before Steven “saved its life”.  When Steven spotted it and grabbed a hold of it, handing it to me, I immediately took the batteries out of it and took the back off of it.  I left it at camp while we went back out hunting.  Approximately two hours later, I put a new set of batteries in it and tested it.  BAM!  It worked.  I have used it since the incident with no issue.  I was thrilled that the water did not destroy my GPS, and I am impressed with the overall performance of the Garmin Oregon 450.  Just to clarify, I was aware that these were marketed as “weatherproof”, but I wasn’t certain how well they would function after being submerged under water for some time.  Thank you to Hunting GPS Maps for selling such a great quality item, and thank you so much to Steven for getting in that frigid water to save my GPS!  I was a happy camper! (pardon the pun)