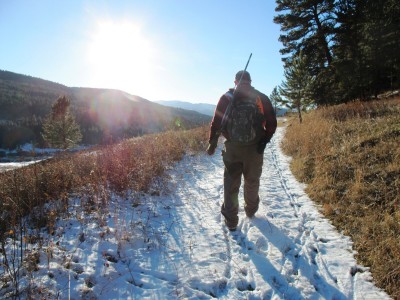 The Montana Department of Fish, Wildlife and Parks is finalizing a rule that will allow landowners to claim up to $2,000 in tax credits for providing access to landlocked state school trust lands. The program, which will be tested over three years, springs from a bill passed by the 2013 Legislature. Sportsmen’s groups tried to open greater access to these trust lands by getting a “corner crossing” bill passed. That would have allowed hunters and anglers to cross from public land to public land at fence corners. But agricultural groups successfully fought that measure. They supported the tax credit, however, which uses the carrot of tax reductions to try to encourage landowners to take part. Time will tell how successful the rule will be. FWP estimated 40 participants a year. http://bit.ly/1d1yVBo

In another story, find out how wild a backcountry elk hunt can get. When Charley Waples and his wife Alina went into the Beartooth Mountains with horses two years ago to retrieve a bull elk Charley had shot, the day got pretty wild – including attempts by a grizzly bear to claim the elk and the appearance of wolves. http://bit.ly/193DcFh