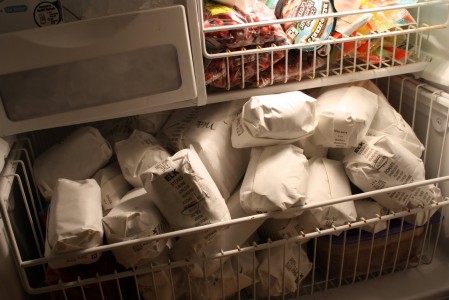 Elk Sure Tastes Better than Crow: Captain’s Column
By angelamontana

When the clock finally ticked to the last second of the 2013 general deer and elk rifle season late Sunday afternoon, I was surprisingly relieved. I hunted hard this year, and I was still elk-less in Montana but was pleased with my effort toward filling my tag. When I first looked at the general hunting season calendar and found out that the season would actually close on December 1st, my first reaction was the last week will offer perfect weather for tracking an elk and for sure that week will hold some single digit temperatures. One thing I have learned, over my years of elk hunting, is that cold weather and snow are ideal for elk hunting. I also know that the weather is always unpredictable.

The first week of the hunting season started off good. Berny, my girlfriend, shot her first elk. Meat in the freezer meant that whatever elk I harvested would be a bonus. Montana offers a liberal five week hunting season for deer and elk. This year, I didn’t keep track of how many days I spent hunting but if I made a guess I would say it was about half of the season. The good news is I am thankful to be able to hunt that many days. The even better news is I hunted some new areas of public land that I had not hunted before and I discovered some great elk habitat.

The areas I had a chance to hunt ranged from White Sulphur Springs down to Lima in the southwestern part of the state. I was also pleased, as I am sure all hunters were, to see fuel prices drop during the course of the season. This year, as the season was winding down, I started to realize how the successes of my hunting seasons in the past were dependent on cold wintery weather. The snow and the cold I was hoping for just didn’t materialize this year during hunting season.

I do know that there were many hunters young and old that ended up being successful this year. My congratulations to all of you that now have meat in your freezer! John Peterson the owner of H and H Wild game processors was happy with his business this year. “We stayed about the same as last year with probably more elk being brought in”, he said. One other thing that Peterson noted was the size of this year’s deer. “A lot of the deer that our customers brought in weighed as much as 150 pounds, so I think, for the most part, the deer have been bigger”.

If you didn’t have a chance to harvest a deer or elk, like me, and you are hoping that FWP will decide to extend the general big game season, not this year. “We are not planning any big game season extensions anywhere in the state this year,” said Ken McDonald, chief of Montana Fish, Wildlife & Parks’ wildlife bureau. “If specific population or damage problems emerge, we’ll use management seasons or game damage hunts to address them.” Hunters must have registered for the game damage roster in July.

So there is always next year. Until then, Berny will relish in asking me every morning, “Would you like for me to take some of my elk out of the freezer for dinner”? I have to admit, it sure taste better than crow!