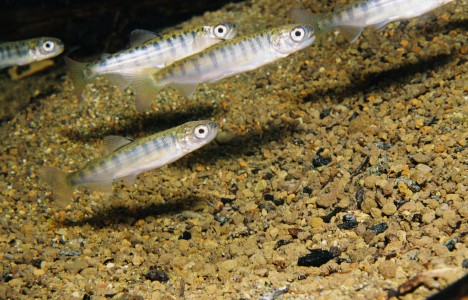 Columbia River upriver spring and summer chinook salmon returns are expected to rebound a bit in 2014, coming in above the 10-year averages, according to preseason projections produced this week by the U.S. v Oregon Technical Advisory Team.

The forecast released Thursday by TAC’s state, tribal and federal officials predicts that the “upriver” spring chinook return next year will total 227,000 adult fish to the mouth of the Columbia River.

The spring chinook return includes wild fish from both the upper Columbia River (endangered) and Snake River (threatened) stocks that receive special protections under the ESA.

The new forecast says that about 42,200 “wild” Snake River spring/summer chinook should return to the mouth of the Columbia.

“The Snake River wild return is going to be above average,” said Stuart Ellis fishery biologist for the Columbia River Inter-Tribal Fish Commission. The 2014 preseason forecast for wild Snake River wild spring/summer chinook returns would be nearly double last year’s total of 21,900 and the recent 10-year average of 24,000.

The optimistic forecasts for spring chinook returns in general are because 2013 witnessed the third highest “jack” chinook counts on record “and we had pretty good returns of 4-year-old fish.”

Jacks are fish entering their third year of life who return to spawn after spending one year in the Pacific Ocean. And a certain portion of each year’s run returns to the Columbia-Snake system as 5-year-olds after growing for two years in saltwater.

Age-5 chinook are dominant throughout March and reach peak abundance in the lower Columbia River by late March, according to a joint state staff report prepared by the Oregon and Washington departments of fish and wildlife.

The new TAC forecasts predicts that the upper Columbia return will total 24,100 adult upriver spring chinook to the mouth of the Columbia, up from 2013’s total of 18,000.

The upper Columbia River summer chinook are fish destined for production areas and hatcheries upstream of central Washington’s Priest Rapids Dam. Historically, these fish spawned in the mainstem Columbia, Wenatchee, Okanogan, and Similkameen rivers. Access to over 500 miles of the upper Columbia River (excluding tributaries) was blocked by the construction of Grand Coulee Dam in 1941. The building of Chief Joseph Dam further reduced available mainstem habitat.

Since completion of the Columbia River hydropower system, summer chinook redds are found in the Columbia, Wenatchee, Okanogan, Methow, Similkameen, Chelan, and Entiat rivers. The upper Columbia summer chinook run size remained at low levels throughout the 1980s and 1990s, with average returns of 19,200 and 15,100 fish, respectively.

Since 2002, the majority of the hatchery production has been mass-marked with an adipose fin clip. Natural-spawning populations also contribute significantly to the run and the stock is managed as a composite population. The summer chinook are considered a healthy stock and are not ESA listed.