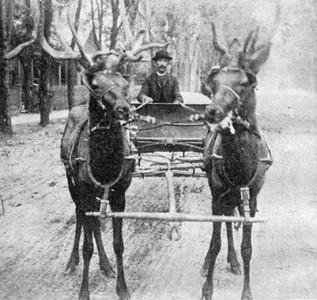 “O what fun it is to ride in a 2 elk open sleigh.” Santa has his reindeer, but Old Colorado City’s Prairie Dog O’Byrne has his elk.

According to Dave Hughes

A few rip-roaring stories have come down to us about Prairie Dog O’Byrne, the man with a carriage pulled around Colorado City by two antlered elk.
But who was he? And other than his infamous rides into snooty Colorado Springs with Laura Belle, Queen of the Red Light District, sitting beside him, what else did he do? There are no eyewitnesses still around from the 1880s and ’90s, when 21 saloons on the south side of West Colorado Avenue kept things hopping. But I have managed to fill in lots of dots about the life of this memorable Irishman. And I have a photograph of him and his elk. The picture is pretty tame, but it proves he existed and indeed, from his having, at one time, a wheel at the back of his carriage in which a prairie dog ran endlessly. We had such a wheel on our ranch in eastern Colorado. I remember as a boy watching it rotate endlessly as the hapless animal never got anywhere. That was Prairie Dog, who seems to have had as many different jobs and visited as many places as his prairie dog had spins of the wheel.