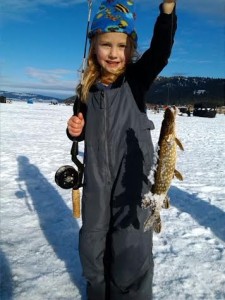 The 40th annual Smith Lake Ice Fishing Derby held west of Kalispell on Saturday, December 28 attracted over 400 anglers, with youngsters composing the biggest part of the crowd. The event is put on by the Sunriser Lions Club as a public service to the community and as a way to make a modest amount of money to donate to family fishing pond programs. Anglers also donated some pike to the Hooked on Fishing program for dissection exercises. The Lions operated a food stand offering hamburgers, chili, and other items.

About 10-inches of ice on the lake provided a safe event for all participants. Anglers landed hundreds of small pike and fewer numbers of perch on jigs tipped with maggots or smelt.

“This is a great family event,” said Warren Illi of the Sunriser Lions Club. “We had a terrific turnout and perfect, sunny weather. It was great to see so many kids catching fish.” Illi manned the weigh-in table set up for anglers to check in their catch in hopes of winning a prize. Winners included:

The Sportsman and Ski Haus of Kalispell provided support. Walleyes Unlimited provided 70 fishing rod-and-reel combinations for kids and for those who needed a rod.

–Moriah Turner is proud of the nice pike she caught at Smith Lake on Saturday, December 28.

–The Turner and Miller kids all caught pike at the Sunriser Lions ice fishing derby on Saturday. 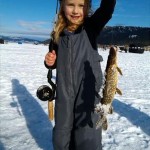 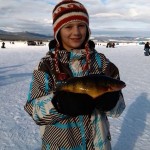 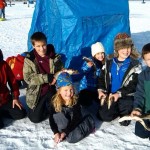 (Report and photos by Montana FWP)