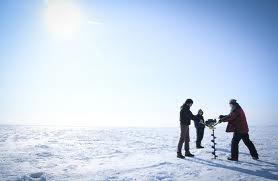 Ice fishing tournament fever is about to hit on Hebgen Lake. In a week and half ice anglers from all across Montana and the heart of ice fishing, the Midwest of the U.S., will head to Hebgen Lake for the third annual North American Ice Fishing Circuit (NAIFC) tournament, January 17-19th. It one of eight ice fishing tournaments that are put on by the NAIFC and it’s the only one in Montana.

The top ten teams from the Hebgan Lake tournament will qualify to compete in the national NAIFC tournament. The tournament will take place on Sunday January 19 from 8am-1pm. Friday night everything gets underway with a fantastic seminar with Mr. Ice Fishing himself, Dave Genz, you will learn about the latest equipment he uses on the ice, breaking down lake maps, and learn different techniques to increase your catch through the ice. Then on Saturday it’s the kids turn. There will be a free in-class tutorial for kids in the Kirkwood Resort & Marina Boathouse at 10 am followed by on-ice fishing on Hebgen Lake until noon with NAIFC Pro Staff. A lunch will be served during the event and each youth who participates will receive a HT Enterprises Ice Rod for their future ice fishing adventures. Parents must accompany their kids during this event. Registration for the two person teams that are fishing this year’s tournament must be completed by 6pm Friday January 17th. The entry fee is $200. Contact Kathy Roberts (320) 252-0428 or e-mail mailto: kathy.roberts@naific.com.

Tournament organizers are expecting up to 100 teams this year and those teams will be competing for up to $21,000 in cash and prizes depending on the number of teams that register.

Anglers who compete in the qualifying ice tournaments around the country do it for many reasons according Baker, “An NAIFC Qualifier is open to any two-person team and we get all kinds of teams. Some want the National Title or are chasing dollar signs; others come to see how they stack up against the competition, while some come to learn.”

The tournament web site is naifc.com and has information on all of the ice fishing tournaments in the circuit.