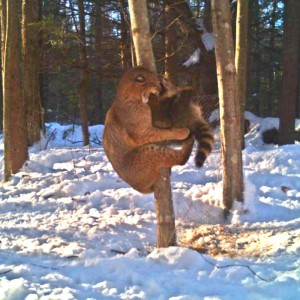 Bobcat VS. Raccoon — Who Won?
By angelamontana

A few weeks ago, Tony Hudon, of Hennicker, New Hampshire, caught quite a series of photos on his trail cam.  The picture below has been making its rounds on the world wide web, and it comes with a pretty cool story.

If you were trying to figure out who would win the fight–the bobcat or the raccoon–Hudon reported on the Mossy Oak Facebook page that the bobcat killed the coon in about five seconds, stating that “it was over before it started”.  He said the series of photos started out with a deer and a raccoon eating in the same area, while the next picture was the deer running away and the raccoon climbing the tree.  Following the commotion, the next picture showed a bobcat attacking the raccoon and the picture below immediately followed that picture.  There was another picture of the two on the ground, and the last picture showed the bobcat walking away with the coon in his mouth. 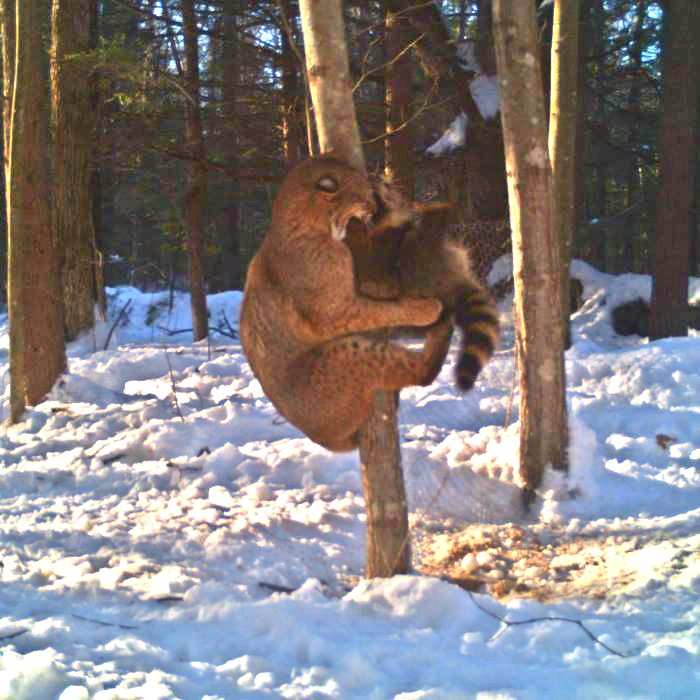 Those trail cams are pretty cool! If you have any cool trail cam pics, we would love to see them!  Click here to email them to us for montanaoutdoor.com.

The bobcat killed it in about 5 sec…it was over before it started…I got more pics of how it went down….this is my picture from a few weeks back