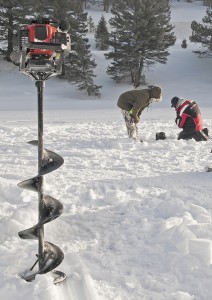 Hebgen Lake, West Yellowstone MT January 19th, 2014.  The team of Chris McFadden, MT and Logan Nordahl, MT took top honors in a field of 79 teams as they won Montana’s only NAIFC (North American Ice Fishing Circuit) National Qualifying Tournament.  McFadden/Nordahl brought in six (6) rainbow trout with a total weight of 12.80 pounds to the scale.  For their efforts, the pair took home the $5,000.00 first place check along with the Hebgen Lake title and “The Wood” – NAIFC trophies.

Finishing second, a little over a quarter pound back was the team of Eric Wolfe, SD and Sean Warner, MN with a total weight of 12.52 pounds.  In third was the Hebgen Lake 2013 defending Champions Shane Hofstad, UT and Brent Cummings, UT posting an 11.15 pound bag.  All teams finishing in the top-10 at the Hebgen Lake Qualifier receive an automatic invitation to the 2014 National/North American NAIFC Championship held in December and hosted by McQuoid’s Resort on Mille Lacs Lake, MN.

The team of Charlie Helbach, MT and Randy Boehnke, MT won the Big Fish prize of 4- St Croix Legend Rods with a Rainbow that set the weight standard at 3.32 pounds. For the tournament itself, the top 15 spots received cash prizes totaling $11,060.00 with the next 15 spots receiving HT Enterprises and Aqua-Vu underwater cameras product prizes in excess of $1,200.00.  The second place team of Wolfe/Warner also won the drawing for a one-man HT portable shelter valued at $285.00.

For more information on the NAIFC, Friday Night Seminar, Cabela’s Kids ICE CAMP, or to enter an NAIFC qualifier please go to www.naifc.com or email jack.baker@naifc.com.   To enter an NAIFC qualifier over the phone please call Kathy Roberts at 320 252 0428. For information on Hebgen Lake and West Yellowstone go to www.destinationyellowstone.com or www.westyellowstoneicefishing.com