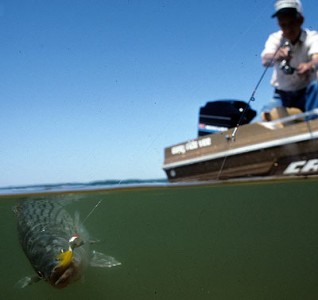 Reflecting on Hunting and Fishing in 2013: Captain’s Column
By angelamontana

It a new year but before we look ahead let’s look back at 2013. In my opinion, if you are a hunter or an angler, then you might have had one of the best overall years in recent memory. I think that you would agree fishing in 2013 was pretty darn good. I spoke with quite a few flyfisherpeople, and, by most accounts, the fishing was very good for most of last spring, summer and fall. The late summer didn’t see that many restrictions caused by warm and low water.

Oh sure, there were some. but considering the below average precipitation we received. I think we faired quite well. Lake anglers from Flathead Lake to Lake Mary Ronan down to Georgetown and over east to Canyon Ferry, Hauser and Holter Reservoir all seemed to be please with spring and summer trout and walleye fishing.

However, in the fall the fishing on Holter seemed to suffer a bit compared to the past few years. I fished Holter a few times last September and each time it was only a 6 fish day which paled in comparison to past years of days of “Catch your limit in one hour of 18-21 inch trout”. As any angler will tell you that is fishing. As I think back to last year I will always remember my time on Fort Peck Reservoir fishing. You have heard the saying the fishing is good but the catching is not so good.

Well, last year the fishing was good and the catching was even better. It didn’t make any difference if you were fishing for walleye, northern pike, or bass. There was a time and place on that 134 mile lake that you could catch fish and lots of them. Here is hoping that the fishing on Fort Peck remains great this coming year. If the water elevation stays about the same and doesn’t fluctuate too much it just might be. The kokanee salmon bite on Lake Mary Ronan was in a word phenomenal. For two weeks after opening day in May, hundreds of anglers enjoyed some banner days on one of the prettiest lakes in Montana.

Hunting in Montana can be, pardon the pun, hit or miss. If you were a waterfowl hunter, the duck and goose populations were very good all over the state. If you were a pheasant hunter, you more than likely had to go to Central and Eastern Montana to experience good pheasant hunting.

Antelope populations are still recovering in the 700 hunting district in eastern Montana, an area where I drew a buck tag. In southwest Montana where I hunted elk unsuccessfully this year there appeared to be a very good antelope population.

Many elk hunters that hunted opening weekend in the Big Hole in south west Montana were successful this year. As the hunting season moved into late November the unseasonably mild weather we experienced with little or no snow in the lower elevations made the hunting conditions from ideal.

So congratulations on enjoying hunting and fishing in one of the best states in the country. If you are one of the few that live in Montana that haven’t had the opportunity to experience the great outdoors then plan on making 2014 the year you discover why Montana is the last best place. Have Happy New Year!