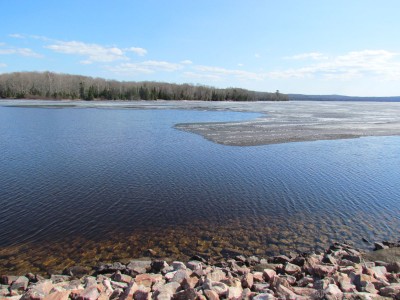 Spring time in January, can you believe the nice weather we have had in Western Montana in the last week? It has been great weather to enjoy just about any winter outdoor adventure you can think of, that is for sure. It is one of the first January’s in recent memory where I have been receiving open water and ice fishing reports in the same e-mail. It is also the first time that I can remember seeing the sun this much in January. I spent the day Saturday skiing at Snowbowl with a couple of my kids, Maris and William, along with Tod Maddux and the snow conditions were fantastic. I am an intermediate skier and the runs that cater to my level of skiing were in very good shape. It was as close to spring skiing as you can get with the sun shining all day. I have heard similar reports from folks that have skied Lost Trail, Lookout, Blacktail, and Whitefish Mountain recently as well.

Ice fishing reports keep coming in. Maybe the most promising report came out of Pablo Reservoir where Dick Zimmer from Zimmer Tackle says the perch bite is on, “Finally Pablo Reservoir is open and I would to tag it as the hottest perch fishery in Western Montana judging from all the reports I’ve received. There were reports of guys taking home as many as 100. Steve Speckert of Polson said he landed the biggest perch he’s caught in 30 years. The size spectrum is from tiny to jumbo with steady action being the norm. I have had the best success with a ¼ oz all –glow Double Treble Trilobite which is a Trilobite with hooks and willow leaf blades on both ends. I’m amazed at how aggressively they attack this jig. The size helps attract the bigger fish and is somewhat of a deterrent to catching so many small fish. Tube jigs also work well. After initially catching a fish on maggots I switch to fish eyes. There is something about the appearance and the smell of the fluids in an eye that drive the fish crazy. Perch fishing is a great way to initiate young anglers. Being on the ice frees them from the confines of a boat and the chance of having a positive outdoor adventure is much increased. I’ve never known anyone who’s developed a passion for outdoor sports that has any regrets”. For more information give Zimmer a call at: 406-675-0068 or email him at macman@ronan.net.

Lew Tripp reported that Georgetown Lake kokanee salmon fishing was still hot. “My wife Anna, Dad, Carla Benson and me are having great time fishing by Denton Point on the lake”. By mid-afternoon on Monday, they already had 20 kokanee salmon on the ice, fishing in 6 feet of water, along with a couple of trout. The ice is about 18 inches thick, according to Tripp.

The North American Ice Fishing Circuit had their only Montana qualifying tournament on Sunday on Hebgen Lake, near West Yellowstone. Ice anglers from all over the US competed in the one day tournament to try and qualify for the Championship fish off which will take place Mille Lacs Lake in Minnesota. Seventy-nine teams competed in the tourney on Hebgen Lake. The team of Chris McFadden and Logan Nordahl from Three Forks Montana took first place and $5000. They caught 6 fish for a total weight of 12.80 pounds. Out of the 10 teams that qualified to fish in the championship 5 teams are from Montana.