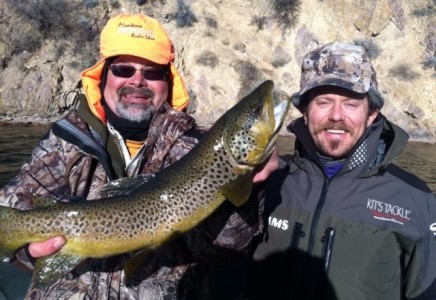 This past Tuesday our boat hit the open water with a new captain aboard…and not just any old captain.  The Captain of the Montana Outdoor Radio Show joined us for a fun filled day of winter jigging on Hauser reservoir just north east of Helena.  The day started out a little slow, but for those of you that know the Cap…things sped right up!  And talk about a fisherman by trade; after watching a couple casts the Cap was a jig master pro ninja!!  Before I get any further, I must note the following “MY SHOULDERS ARE STILL EXTREMELY SORE FROM NETTING ALL THE CAP’S FISH.”  As much as we loved having the Captain for a day…dad and I’s arms and shoulders paid for it!!  The Cap was hauling fish in like he was Chuck Norris with a jigging rod!  By the afternoon he was so confident he looked back at us and said, “Watch this guys, I’m going to get one right off that golden willow bush.”  I looked at dad and before I could give a smirkish smile the Cap yelled “GOT EM.”  Well I’ll be a blue walleye if he didn’t catch a huge rainbow right off the golden willow.

And speaking of golden, the best was yet to come!  We pulled into one of dad and I’s favorite slides for big browns and told the Cap to get ready.  The Cap sent his marabou jig flying towards the bank and started his jigging rhythm back to the boat.  After a few “pops” from his rod tip, he set the hook in a fish that peeled drag and stayed tight to the bottom. “You got em’ Cap” yelled my dad as I was fumbling for the net.  Dad and I both knew the Cap had hooked into a beast of a brown trout in our favorite spot we call Salmo Trutta alley.  After a couple minute battle, a beautiful large male brownie arose from the depths.  There we all stood looking at this amazing specimen in the net and Cap broke the silence in a whispered panic, “Do we have time for a quick picture?”  I looked at Cap and said, “what a guy to be concerned of the well-being of such a fish but of course we will get a quick picture.” 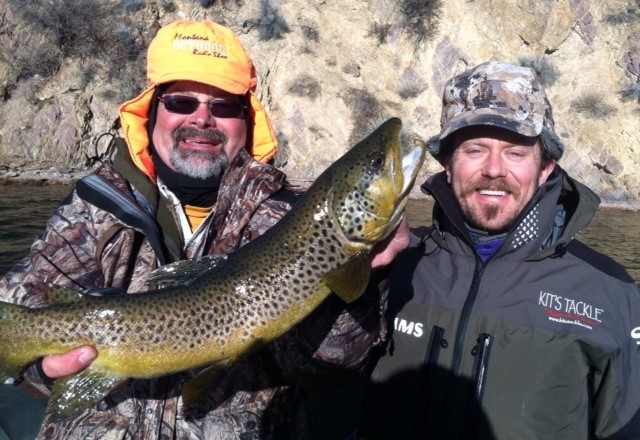 Just as the Cap was concerned for the well-being of his awesome brown trout, he has the same concern and appreciation for all his listeners and readers every week on the Montana Outdoor Radio Show.  Amongst netting fish, it sure was a blast to hear the story behind Cap’s venture and how he still works so hard after sixteen years to make the show better.  It really was a true inspiration and adventure to get to spend the day on the water with the Captain.  Cap even told us stories about sneaking into major league baseball games and interviewing the players before getting caught.  Guess the Cap just had it in his blood…and by the way he jig fishes, he must have also spent some time in the stadiums trout pond practicing!!

Here is a quick HOW, WHEN AND WHERE summary of our day fishing Hauser.

How:  We were using the pro series marabou jigs.  Brown/Yellow and Black seemed to be the hottest colors for the day.  We were creating a buffer zone between the boat and the shore just far enough so we could still accurately cast our jigs within’ a couple feet of shore.  We would let the jigs sink to the bottom between jig ups and let the jig fall on a slack line.  When jigging we like to “pop” the rod into the air which in turn shoots the jig through the water like forage scurrying away.  Then when you let the jig fall on a slack line the fish thinks the forage is dying and inhales it.  Then when you go to “pop” your rod the next time…BOOM GOES THE DYNAMITE!! 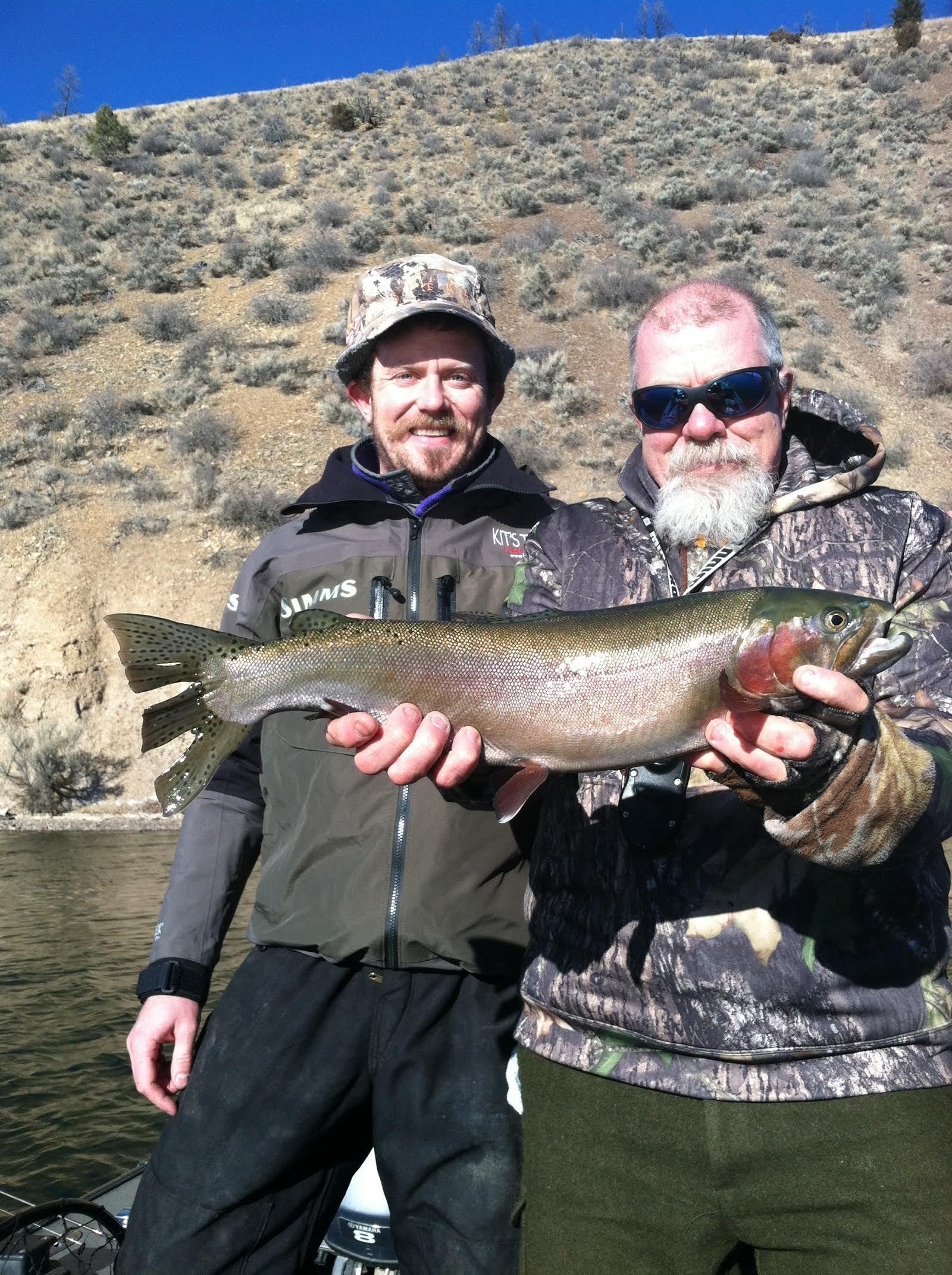 When:  Well obviously it’s the middle of winter but the Riverside ramp located directly below Canyon Ferry Damn on Hauser Lake is open year round.  So any winter day you feel is warm enough is a good day to get out.  The best winter jigging bite is in the warmest part of the day usually between 1:00-4:00 pm.

Where:  Directly below Canyon Ferry Damn on HAUSER Lake.  We ramp in at Riverside Campground and there is about four or five miles of fishable shoreline before making it to ice.  Plenty to spend a day or two exploring for big rainbows and browns…and even a chance at a big northern!  I say this because dad got bit off by a giant torpedo this winter.

And before I quit blabbing I have to include the recipe from our hot lunch to go with the hot fishing of course.  We had one of our favorites (a recipe brought to life by my wife Katie) we call Tortilla Soup! 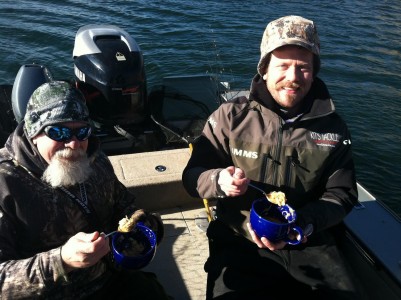 Here is how to stir the pot:

Serve over tortilla chips and enjoy with shredded cheese and fresh guacamole.   DELICIOUS!!!