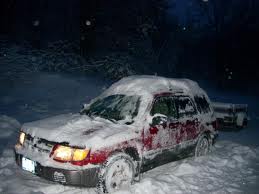 Weekday morning scenario: It’s 9 degrees outside, and the wind is whipping the snow around like a blizzard is passing through your yard.  You stare out the window, dreading the 25-yard walk to your vehicle.  You know your hair is about to become a block of ice when the icy air touches it, as it is still damp from your recent shower.  It has to be done, though.  You put on your coat, wrap a scarf around your face and run to your vehicle with your key in front of you like you’re about to enter a jousting competition.  You make it to the car.  The frigid air temperature causes your vehicle to struggle to turn over, but you got it.  You wait while the inconsistent sputtering turns into a constant purr.  Your breath is causing a film of ice on the inside of your windshield that has already hardened.  You eyeball the temperature gauge as you shiver underneath your jacket.  You wait.  Watching the orange needle move very slowly to the right, after approximately 10 minutes, your car warms up, and you turn it off and go inside.  As you brave the elements while running back inside, you wish you could just start your vehicle, leave it running and go back inside…but you can’t–because it is illegal.

According to a recent post on wnd.com, it is illegal to warm up your car, unattended, in several states.  Apparently, back in 2004, the state of Ohio enacted a law that states, “No person driving or in charge of a motor vehicle shall permit it to stand unattended without first stopping the engine, locking the ignition, removing the key from the ignition.”  A person can even get fined $150 for failing to comply with this law.  And, in Madison, Wisconsin, it is illegal to leave your car on a public street with the keys in the ignition, regardless of whether it is running or not.  Texas, Colorado, West Virginia and South Carolina also enforce similar laws.  What does that mean for self-starters on vehicles?  The area for that is gray, as these laws were introduced before self starters became popular, but I assume the laws will have to be re-worded at some point.

Even though these laws originated to help reduce the number of vehicle thefts, we, as Montanans, should be fortuante that we don’t have to sit in our cold-as-a-freezer vehicles while they warm up–at least for now.