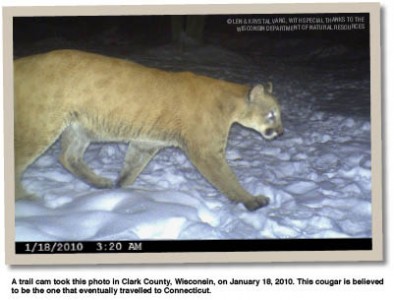 Mountain Lion from South Dakota Killed in Connecticut
By angelamontana

I recently came across an interesting article, via griffinsguide.com, regarding mountain lions and their travel capabilities.  According to the article, back in June of 2011, a young male lion was killed in Milford, Connecticut after being hit by a car.  This was the “first confirmation of a cougar in the state in more than 100 years”.  One hundred years! 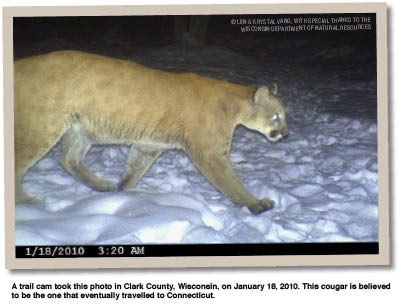 After biologists conducted some extensive research on the animal, the cat was aged at two to five years-old.  The necropsy showed the cat was healthy, with an empty stomach, and he had some porcupine quills under his skin.  Surprisingly, the lion’s DNA matched a subpopulation in South Dakota.  After further testing and investigation, the cat’s DNA also matched the DNA taken from hair and scat samples collected from a mountain lion tracked by biologists in Minnesota and Wisconsin a whopping 18 months earlier.  To add to the shock value, it was also confirmed by DNA tests that the SAME cat had been seen in Lake George, New York in December of 2010. Biologists hypothesize that this particular cat kept moving eastward because he never found an area suitable for a habitat with other cougars.

Movements by young females will be even shorter, limiting the ability for these populations to spread. It is unlikely that New England will soon witness another long distance disperser.

So, that mountain lion that you or your friend got this year in Montana may have traveled here from as far away as Florida, although unlikely, still possible.  That’s an interesting thought. 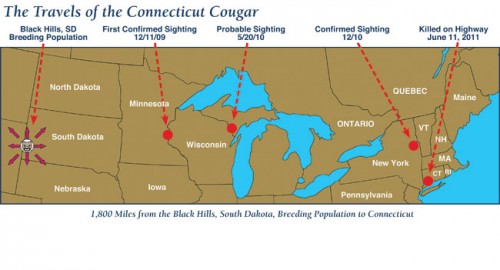