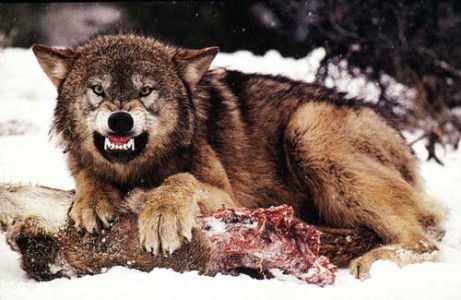 According to a recent article on spokesman.com, Idaho state officials are discussing a proposal that would allow hunters to bait wolves in the panhandle, as Idaho Fish and Game wants to see more wolves harvested.  They are hoping that by reducing pack numbers, they can help “reverse declines” in the elk population in the upper St. Joe River drainage.

Would you agree with Montana officials if they allowed the baiting of wolves, too?  How about a second tag to black bear and cat hunters?  What about extended bear and cat seasons in certain areas?

Here are more details on the topic from the article:

The bait proposal will get an airing at a Feb. 27 open house in Coeur d’Alene on big game seasons, but adopting it would require action by the state Fish and Game Commission and the Idaho Legislature.

Wildlife managers like to see 30 elk calves for every 100 cows during aerial surveys in the spring. In recent years, calf ratios in the upper St. Joe have dropped to the low 20s and teens in what was once one of the state’s most productive elk hunting areas. Calf survival is also a concern in part of the Coeur d’Alene drainage, Wakkinen said.

In addition to the wolf baiting proposal, Fish and Game also wants to liberalize hunts for black bears and cougars in parts of the Panhandle. Some hunting units would have longer seasons for bears and cougars, and hunters would be able to use electronic calls and purchase a tag for taking a second animal.