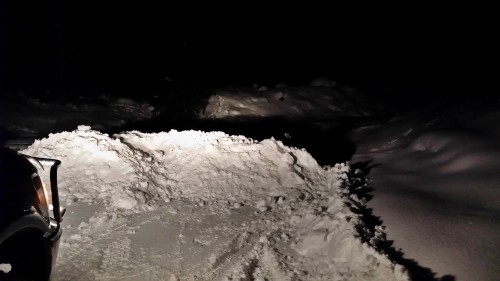 Is It Legal to Make a Public Road Private?
By angelamontana

Let’s say that Jane Doe is all about hiking with her dogs, or even cross country skiing.  She typically walks her pups, or skis, on a public road that, although not very often in the winter, vehicles do travel on year-round.  Maybe she even lives very close to the road and doesn’t necessarily like people driving by very often–if at all.  Whatever the case, Jane decides to personally take action and close this public road herself, by plowing a big snow bank right up to the bottom of the road, denying access of the road to cars and trucks not equipped with plows.  This basically means that she just managed to turn a public road into a semi-private road that suits her own wants.

Now, let’s say cat hunter Joe Schmoe decides to take a drive to the end of the said public road, that he drives year-round, because he caught some tracks at the bottom and wants to see which direction the mountain lion went.  He is looking forward to getting to the end of the road to see if the cat went farther up or down.  Only, Joe gets part way up the road and doesn’t have a plow on his truck, so he can’t drive through the snow bank road block that Jane Doe put there.  Being that Joe is in a bit of a hurry, he doesn’t have time to park his vehicle and walk up the rest of the road and hike up, nor should he have to…or should he? This public road has, in a sense, become a locked gate to anybody not cross country skiing, snowmobiling or snow-hiking.

Common sense says it is not legal for any individual to close a public road, whether it is Jane Doe or Joe Schmoe.   But, although that may be the case, it is not necessarily always enforced. 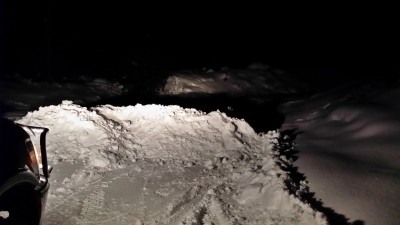 This scenario is based on an actual situation right here in Montana.  The real story, in summary, is that after somebody recently encountered a plowed snow bank blocking their access to drive on a public road, the Forest Service was contacted and asked what would happen if a person intentionally blocked a public road.  The caller was assured that it is illegal for anybody to intentionally block access to a public road, and possible jail time was even mentioned as a possible punishment.  After the caller revealed that a person actually did intentionally block vehicle access on a public road, there were some calls made and the Forest Service discovered who did the plowing.  They followed up with the caller stating that they don’t have the equipment to remove snow, but anybody else could legally remove the snow if they wanted to do so.  They said they weren’t going to do anything about it and were quoted saying “It’s beyond our control.”  Then, the conversation was over.  So, does this mean that, although illegal, individuals CAN close public roads as they see fit?

Interestingly enough, just a couple of days ago, another snow road block was discovered on a public road approximately 90 miles from the other location.  Two individuals discovered this one right next to a driveway that was off of the public road, and it appeared the people living at the residence had plowed the road closed to prevent more traffic from driving through.  This is just an assumption, though, but why else would anybody intentionally block a public road like that? You have to move plowed snow somewhere, but for citizens to basically restrict access on a public road as they see fit, based on their own interests, is crossing a line…or is it?  Then again, if there are no consequences for individuals taking the law into their own hands, then why is there even a law?    Right now, it’s just snow, but are kelly humps next when the snow melts?