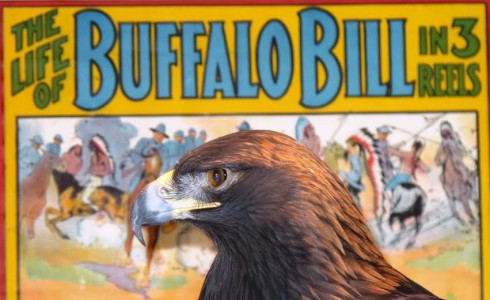 The red-tailed hawk eats snakes. That means I like the red-tailed hawk, since snakes freak me out. Even little water snakes make me jump when I’m wading along a stream bank. Sometimes, to draw rattlesnakes out of their holes, a red-tailed hawk will land near the snake and stretch out its wings, daring the snake to strike. If the snake takes the bait and bites the hawk’s wing, the hawk chomps down on the snake.

Because the hawk has no muscle in its wing, the snake gets a mouthful of feathers and the hawk avoids being injected with snake venom. This was just one of the many things I learned during a trip to the Raptor Experience at the Draper Museum of Natural History in Cody, Wyo., last week.

The museum houses five live raptors – the hawk, a great-horned owl, golden eagle, peregrine falcon and American kestrel – along with a turkey vulture. The birds meet museum visitors every day of the week in the Buffalo Bill Center of the West’s entryway. It’s a great chance for people to learn more about raptors that live in the West and to see them up close and ask questions.

For more on the birds, check out my story at billingsgazette.com. http://bit.ly/1h1uWYV