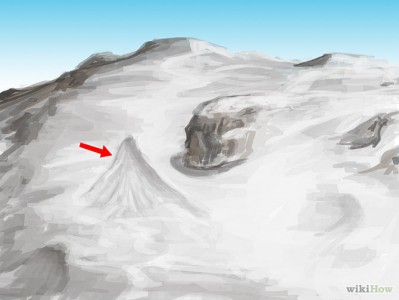 Loose dry-snow avalanches – These can be very large. They start at a single point and can move at 40 mph / 64.3 km/h, and at that speed can easily become airborne. Slab avalanches – If a slab of snow ceases to be supported, it is easy for it to fall away. Snow accumulates on leeward slopes due to wind and unsettled snow creates soft slabs that are easily triggered by avalanche victims. Hard slabs form on lee slopes where winds are over 30 mph / 48.2 km/h and the slab turns as hard as concrete. The breaking of such a slab can be heard as a huge cracking noise. Wet avalanches – These are common during spring months or following thaws, as water weakens any layers of snow, including down to the ground level. Wet avalanches can be loose or slab, fast or slow, and set like concrete once they stop making rescue time for victims extremely short. These often occur following heavy rain or a snowstorm that starts cold but ends warm. Ice avalanches – Ice peels off a crag and falls down the mountainside. Cornice collapse – Cornices (deposits of wind-drifted snow) can collapse under their own weight, or following a heavy snowfall. 2. Take an avalanche safety training course and read up on avalanches. Knowledge is your best defense against the danger of avalanches, and there’s no better way to gain firsthand knowledge than by taking an avalanche safety course. It is also a very good use of time to read widely on avalanche safety, as there are a number of good books devoted solely to the topic, along with many case studies that make for grim but sobering reading. It has been shown by research that most victims caught by avalanches were either unaware of avalanches or safe route travel skills, or where they did know, they chose to ignore the warning signs.[2] Taking an avalanche safety course won’t dent your time much but it could save your life. Such courses vary widely in price and scope, and you can choose courses that fit your primary activities, such as skiing or snowmobiling.

Learn how to measure slopes both with tools and without. Learn how to recognize avalanche slopes. This includes knowing the signs of previous avalanches on vegetation and other natural features.

Learn how to evaluate avalanche hazards. This basically consists of asking: 1. Could the slope produce avalanches?; 2. Could the snow fail?; 3. What will happen to me if the slope avalanches?; and 4. Will conditions get worse. A good course should teach you how to respond to each of these questions and how to to a hazard evaluation summary.[3]

Learn to ask for local knowledge, especially when you’re from out of the area. It can also be helpful to look at internet records pertaining to the ski fields where you’re headed, to see what previous seasons have brought by way of avalanches.

The surest sign of avalanche danger is evidence of recent avalanches, an indication that local conditions are right for more. Keep in mind that 95 percent of avalanches occur during or within 24 hours of heavy rain or snowfall, and high winds also contribute to avalanche formation, so try to avoid heading off-piste in these conditions. Particularly warm days, with thawing or temperatures that approach or surpass freezing, are also high-risk. Another warning is if snow cracks, collapses, or makes a “whumph” sound beneath you; that’s a sure sign that the snow is stressed and can’t bear your weight. Any sudden change in temperature can trigger an avalanche. Even shadows creeping across the face of a slope can change the temperature enough to make snow unstable. If snowballs (rollerballs or sunwheels) are rolling down the slope, this is an indication of temperature increases. In many mountainous areas, these forecasts are regularly updated throughout the avalanche season. You may be able to find this information on the internet, on local radio and TV, at resorts and government offices, or by calling hot lines (Colorado, for example, has 7 hot lines to cover different areas of the state). If an avalanche advisory is in effect, postpone or reroute your trip. If you’re near a resort or on frequently used trails, signs warning of avalanche danger may also be present.

5. Know how to test the snow for avalanche potential.

Before venturing onto a potentially dangerous slope, find a small, safe slope close by on which you can perform stability tests. The test slope should be about the same angle and have the same aspect as the slope you want to cross, but it should be small enough so that the mini-avalanche you may trigger won’t be dangerous. If you can determine that the layers of snow are well bonded and strong, the slope is probably safe. There are several tests you can perform, from stomping on the snow to digging a test pit (tests include the Swiss ski-shear test, the loaded column test, and the Rutschblock test). See the “External Links” section below for more details on precise tests. In addition, always ask yourself if the weather is contributing to the potential for instability. When traveling into avalanche country, carrying some simple equipment can save your life:

7. Practice avalanche safety while out and about.

There are several key things you can do improve your chances of either avoiding or getting away from an avalanche, as follows:

8. Know what to do in the event of an avalanche.

While it is hoped you will never need to have to try and escape an avalanche, knowing what to do in the event that you are caught up in one can give you a greater chance of survival. Doing an avalanche course is an important part of knowing how to react in the moments of becoming trapped in an avalanche. Learn both avalanche survival and rescue techniques. None of this is second nature; it must be learned and is not something you want to be learning for the first time in the heat of the moment.

Here is a short, 5-minute video on avalanche safety that is worth watching:

(Above information via wikihow.com)