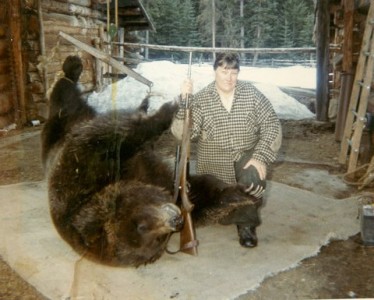 Fish Wildlife and Parks game warden Vern Waples was legendary in south-central Montana. For more than 30 years he patrolled the Beartooth Mountains and surrounding areas from his home in Red Lodge. His family wisely videoed chats with Vern before he passed away. Some of those his daughter-in-law Ginny Waples has transcribed. She shared one of those tales with The Billings Gazette. It’s about the shooting of a grizzly bear by a caretaker in the Slough Creek area.

As told by Waples, here’s my favorite part of the story. The setting is the MacDonald’s cabin just north of the Yellowstone National Park border. Margaret MacDonald’s husband, Jock, has just returned after a three-day trip to Gardiner to secure provisions for the winter and doesn’t have any idea that during his absence a bear broke down the cabin door and was shot by Margaret.

“And so, he hollers to her, ‘Come on, hon! Give me a hand in getting the horses unharnessed and fed.’ So she goes out and helps him unharness the horses and so forth. By this time it’s getting quite dark. They had enough light to get this stuff in. And so, he loads up an armload of grub and goes down the passageway, gets to the door, and falls across a bear.

“Now, Jock probably drank most of a quart of whiskey from the transfer point to getting on home and he’s pretty happy and didn’t understand everything that’s going on. But she takes a pile of groceries in her arm and starts for the door.”

‘MARGARET! YOU DON’T UNDERSTAND ME! THERE’S A BEAR IN THE HOUSE!”

“‘I KNOW THERE’S A BEAR IN THE HOUSE YOU GODDAMN OLD FOOL! WHO DO YOU SUPPOSE SHOT HIM?!’