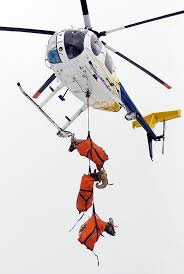 Montana Fish Wildlife and Parks relocated a total of 61 sheep via helicopter from Wild Horse Island State Park last week near Big Arm. The sheep were captured and transported in an effort to supplement other herds in Montana, and control population on the island. But the amazing feat of controlling herds is how the FWP actually transports these animals….by helicopter. Check out video:

After capture, the sheep were transported from Wild Horse Island by helicopter to Big Arm State Park, where biologists processed them. Health and condition tests on the sheep included: nasal swabs and throat cultures for pneumonia complex diseases, blood analysis for various health tests, fecal samples for lungworm loads, and body condition index tests. According to FWP Biologist Bruce Sterling one ram died during the capture operation and one escaped on site.

A total of 59 of the sheep were successfully released yesterday and today in two locations in Northwest Montana to bolster the existing herds at these two locations:
–Kootenai Wildlife Management Area: 26 rams, 6 ewes
–Berray Mountain (in the Bull River drainage north of Noxon): 11 rams; 15 ewes, 1 male lamb

The objective of the capture project on Wild Horse Island is to keep the bighorn sheep population in line with available habitat. The target population for the island is about 100 sheep, but the population had reached 160-200 sheep before the capture operation. State Parks staff has been working for the past several years to conserve the island’s short grass prairie habitat that is important to wild sheep and other wildlife species.

Their full press release can be found here.