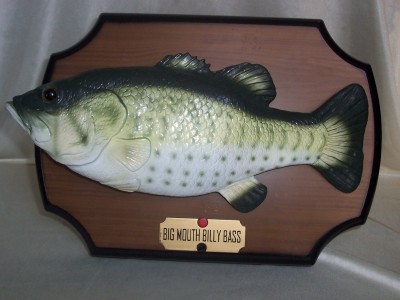 Billy the Bass Scares off Burglar
By OutdoorAly

The popular novelty gift, Billy the singing bass, was known for shocking people by breaking into song when motion activated. Even though the faux-mounted fish has been around for over a decade, he still managed to startled one particular uninvited intruder. The novelty bass, which had been hung near the door of Rochester’s Hooked on Fishing shop and would start singing “Take Me to the River” whenever someone entered the shop, was found on the floor after the intruder knocked it down as part of breaking the door to get in, according to the Olmsted County Sheriff’s Office.

Video of the fish below, and full story from the Milwaukee star tribune here:

The crime scene of a break-in at a Rochester’s Hooked on Fishing shop showed evidence that a burglar got scared off by a motion-activated, singing bass, authorities said.

But the intruder appeared to have left in a hurry, without stealing anything — not tackle nor cash that had been left in “a very visible spot,” Sgt. Tom Claymon told Milwaukee star tribune.

The bass “took one for the team,” Claymon said. “There were plenty of things to take but nothing was missing … other than Billy’s pride”