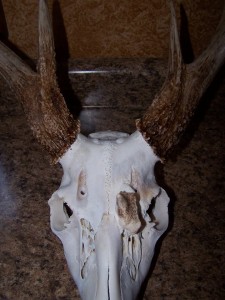 We all know there are non-typical bucks out there, but how surprised would you be to shoot one with an antler growing right from his forehead?  The craziest part wasn’t even the antler, it was what the taxidermist at Cliff’s Taxidermy, of Plainfield, Illinois, discovered while he was cleaning the skull for a European mount that was so interesting.

While Cliff’s Taxidermy was in the process of doing a European mount on a buck that had an antler growing from its forehead, he was discussed <disturbed?> to find out that the odd growth was due a Rage broad head that had entered the eye socket and the remaining insert and a broken piece of carbon arrow protruded out its forehead. The bone that grew around the shaft was hollow, but the antler on top was solid without a pedicle.

What is the most unusual animal you have come across or harvested while hunting? 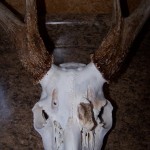 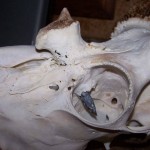